HSE Acknowledged as Most Cited Russian University in 2016 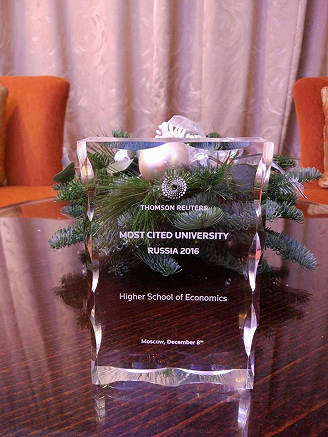 The winners were selected based on their citation indices in the Web of Science Core Collection, which is the oldest and the most authoritative database of the world’s leading journals, conferences, and books.

The Higher School of Economics and the Siberian Federal University won in the category of ‘Most Cited University’. Experts from Clarivate Analytics used the InCites tool to analyze which Russian universities were the most active in terms of Web of Science Core Collection media publication over the last ten years, and calculated which of them had the highest average citation of papers, normalized by subject area.

Pavel Kasianov, an expert in scientometrics at Clarivate Analytics, says that the high award reflects HSE’s focus on publishing its research outcomes in the most authoritative academic journals, which are read worldwide and thus attracts the highest numbers of citations.

Best Russian Journals to Go on Web of Science

On September 25 a presentation of the Russian Science Citation Index (RSCI), of which HSE is a partner, took place. The purpose of the project is to integrate Russian academic journals into the international exchange network of scientific information. RSCI has listed 1000 journals, based on bibliometric indicators and expert reviews, to go on the Web of Science platform.