Rudolf Laiko and Sophia Tolstoukhova have applied deep learning methods to solving immunological issues that could contribute to the further development of personalized medicine. The results of their research were presented at the International Conference ISMB/ECCB 2017 focused on the application of intelligent systems in molecular biology.

Modern active immunotherapy involves injecting medications containing special cells that stimulate the immune system. Some cancers and immune deficiencies are treated this way. But developing these medicines takes a lot of time and resources and success is not guaranteed, since it is impossible to predict whether a potential cure will work.
A group of students on the BA programme in Applied Mathematics, led by MIEM doctoral student Vadim Nazarov suggested a number of solutions that make it possible to narrow the range of medicines tested by conducting computer experiments. This could make scientists’ lives much easier. 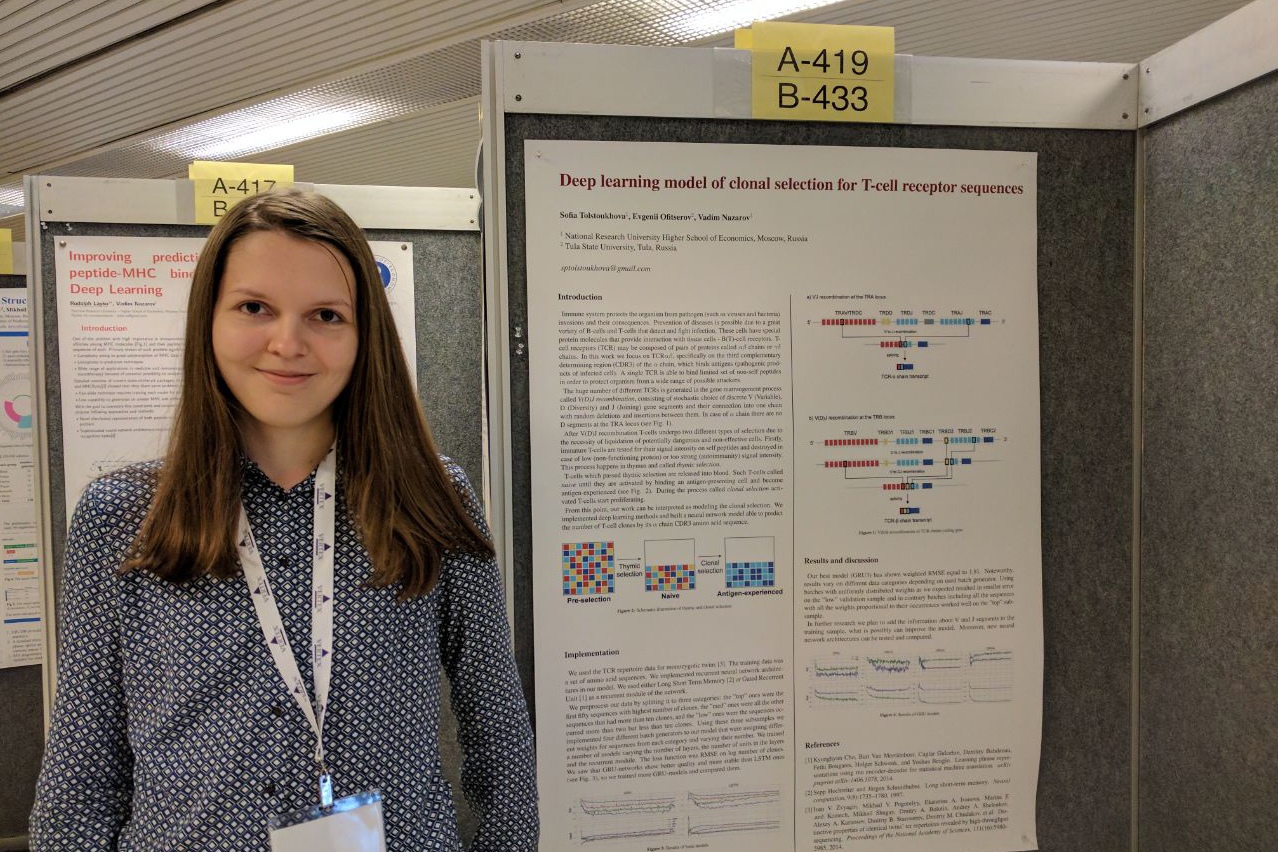 Sophia Tolstoukhova, student on the BA programme in Applied Mathematics

How to predict the lymphocyte behavior

The project by Sophia Tolstoukhova is focused on assessing the patient’s T-cells, i.e. the cells directly involved in the immune system in recognizing foreign antigens along with immunoglobulin. This information about T-cell diversity could show which diseases the immune system can cure itself, and which will require intervention.

Sophia Tolstoukhova developed a mathematical model that predicts lymphocyte selection, and developed an outline of its implementation. This model could be embedded in various sets of programmes for sequential processing or used independently. The programme makes it possible to estimate the probability of the destruction or survival of individual lymphocytes.

We are really focused on this, as this model clearly has great potential

‘Until now nobody solved the problem of predicting the presence or absence and the number of specific T-cells in human blood,’ says Sophia Tolstouhova. ‘There has been no request from the medical community on the model of thymic and clonal selection. We are really focused on this, as this model clearly has great potential. Assessing the immune repertoire (i.e. a set of all B- or T-cells), its diversity, tracking the dynamics of the repertoire could make immunotherapy more efficient and accurate by calculating the missing components, or T-cells in our case.’

This research conducted by an HSE student will interest scientists who experiment on using immunotherapy in treating HIV, which leads to secondary, acquired, immunodeficiency. The development will also help in the study of autoimmune diseases when the immune system attacks healthy cells in your body by mistake. 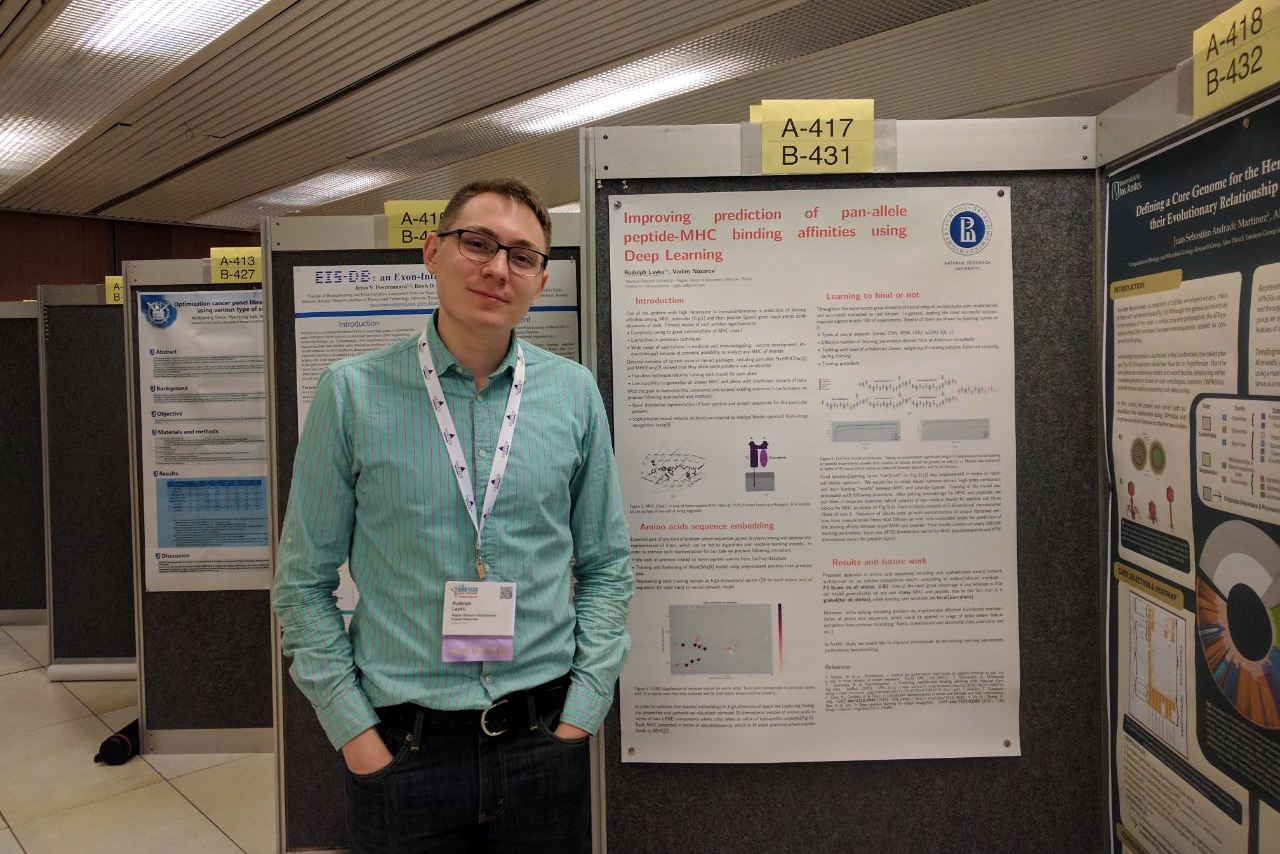 Rudolf Laiko, student on the BA programme in Applied Mathematics

How to increase the chances of successful transplantation

Rudolf Laiko’s work focuses on a common problem in medicine: the major histocompatibility complex regulates the compatibility of tissues and plays a key role in successful transplantation of organs and tissues. It is possible only in those cases when the immune system recognizes a new tissue as its own, rather than as alien. So before undertaking active immunotherapy, it is important to answer the question: what medicines are required? For example, to treat tumors, you need to develop medicines that attack only the tumor in the context of a given recipient’s MHC.

‘Predicting the strength of MHC-peptide binding is very important in developing medicines for immunotherapy, as T-cells and MHC work as a complex, and in order to stimulate the immune response to pathogenic peptides we need to evaluate not only the reaction of T-cells, but the MHC reaction as well,’ explains Rudolf Laiko. ‘Knowing the predictions for both types of molecules we can estimate the range of the tested medicines and run biological experiments for them.’

HSE students call their development ‘tools for other scientists’. They believe that demand for them will grow with the development and introduction of the personalized medicine into everyday life. 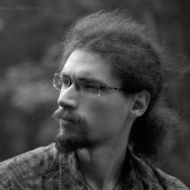