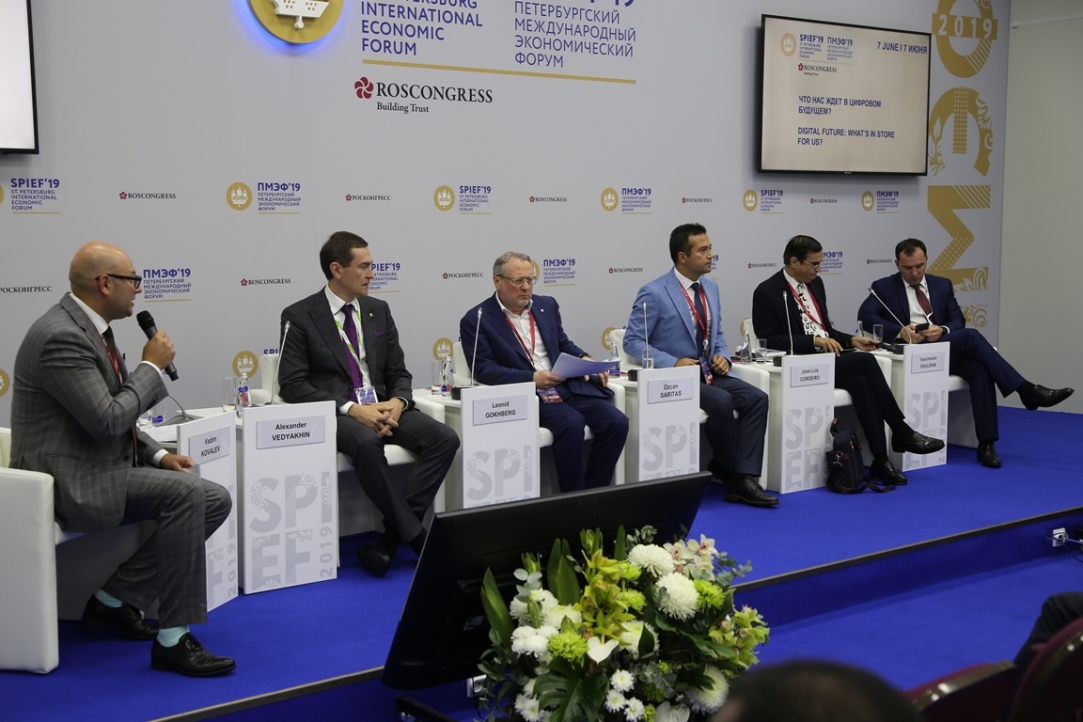 Along with personal computers, the digital economy originated in the 1980s and quickly began to evolve, with information and technology becoming a bigger and bigger determinant of a country’s economic growth. A new stage of this evolution is now upon us, with explosive technology and data transformation now becoming one of the decisive factors of production.

Such was the assessment given by Leonid Gokhberg, First Vice Rector and Director of the HSE Institute for Statistical Studies and Economics of Knowledge, when he spoke at the panel, ‘What Awaits us in the Digital Future?’ at the St. Petersburg International Economic Forum (SPIEF-2019). However, in his view, the key challenge that lies ahead on the road to the digital future is digital inequality.

Researchers evaluated the level of digitalization of Russian high-tech enterprises in the economy, as well as the presence of advanced production technologies and advanced management practices. It turned out that only 12% of enterprises correspond with the ideal model. 44% of enterprises (and, in a number of sectors, 50-60% of enterprises) do not possess any of these three factors. Thus, in the Russian economy there remains a large enclave of enterprises that are gradually losing their competitive edge and becoming, in the figurative expression of Leonid Gokhberg, the ‘economy of ignorance’.

According to studies, only 11% of the Russian populace has advanced IT skills.

Among workers in the economic sector, 45% do not use computers at all, and this poses a serious challenge for both Russian society and business

A person’s likelihood of having advanced technological skills depends on income, age and place of residence. It can also depend on the industry in which a person works—in many industries, there is no demand for advanced skills.

People are expecting big breakthroughs in digitalization, but currently there are risks that digital inequality will increase. At the same time, Leonid Gokhberg noted, the main mechanisms for enacting public policy are budgetary injections, rather than working towards a certain result. Private investment and entrepreneurial digitalization initiatives need incentives, and policies should take the interests of companies and specific groups of the population into account.

However, representatives of advanced Russian companies are optimistic about current results and the prospects for digitalization.

Alexander Vedyakhin, First Deputy Chairman of the Board of Sberbank, affirmed that artificial intelligence is already transforming work in the banking sector. ‘In the areas we use it, we are able to reduce costs and increase revenue by at least 30%.’

Vedyakhin noted that there is currently not a single department in Sberbank that remains untouched by modernization. This includes services within the organization (from ordering stationery to issuing certificates to employees) and interactions with customers.

Digitalization is like a magic sauce - you add it, and the dishes improve

According to Alexander Vedyakhin, digital transformation has begun in sectors that handle a lot of data. In other sectors, however, it will happen a bit later.

Vyacheslav Shulenin, Deputy Chairman of the VEB.RF State Development Corporation, described how public administration in Moscow has changed thanks to digitalization. For example, thanks to a new online supplier portal where any small and medium-sized business can easily apply to participate in competitive procedures, product quality has improved, and service costs have decreased by more than 12%.

According to Vyacheslav Shulenin, there has been success in Moscow with implementing cloud accounting—more than two thousand companies have switched to it, saving more than 2 billion rubles a year. The project ‘Active Citizen’ allows users to send funds to city improvement projects, taking citizens’ preferences into account, and ‘Electronic Planner’ gives parents the opportunity stay informed about how their child is doing in school. It is not surprising that in the Perm region, for example, 25 Moscow digital systems are now being adopted. 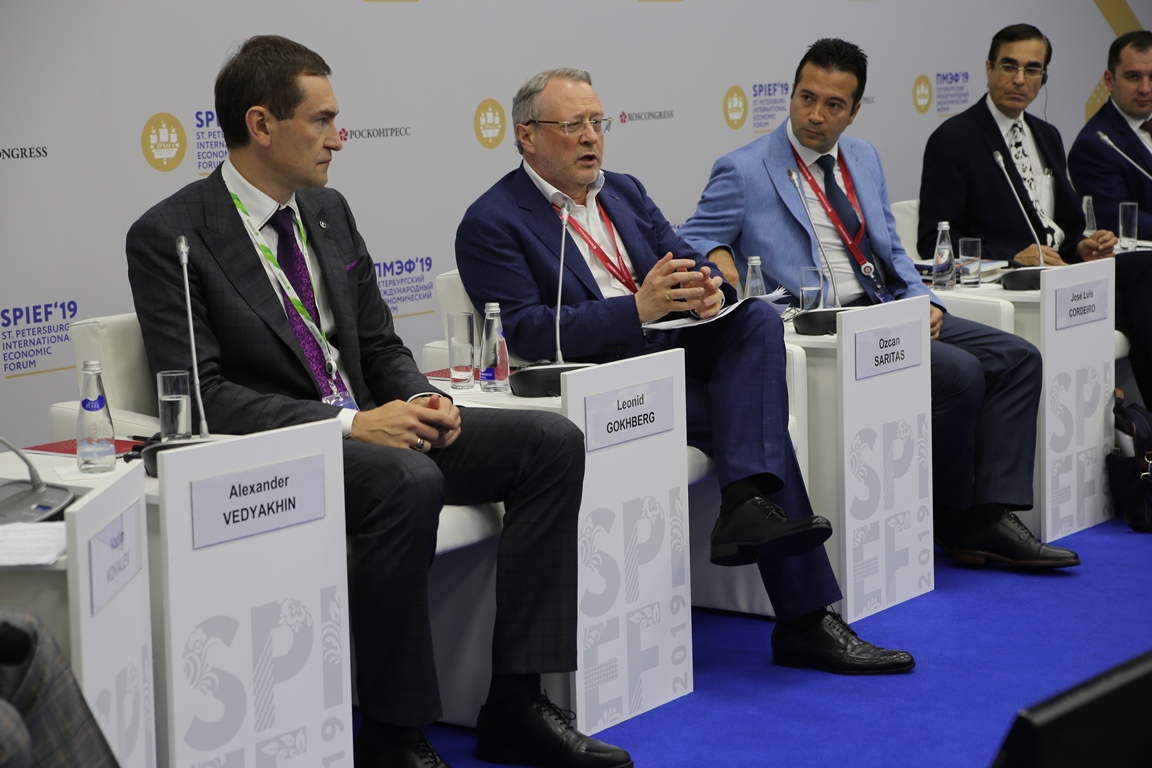 Experts who participated in the panel eagerly reflected on how digitalization will change the world in the near future.

HSE Professor and Chief Editor of Foresight Magazine Ozcan Saritas said that the amount of worldwide information is growing exponentially – 90% of all the existing data of the world was only created last year, and we use only 1% of this information.

Can you imagine how much more information we need to process, assimilate and apply? And how much still hasn’t been collected?

According to Professor Saritas, someday people will be able to determine what will happen to the planet if certain actions are not taken. Artificial intelligence will not only be driving cars, but also preventing accidents, and industrial robots will increasingly be used in industrial production.

‘We live in the most incredible time in history — a post-human age of development is beginning, an age of superhumans who will have more abilities than we do,’ said José Luis Cordeiro, a professor at the Massachusetts Institute of Technology and author of the bestselling book, The Death of Death, famous for its futuristic prognoses.

He recalled that humankind has gone from punch cards to 128 GB flash drives in a span of 30 years, so, in 30 more years, it may be that we will have this very flash drive in our brains, where you won’t be able to lose it. Our brains might be connected to cloud computing, and humankind will overcome the limits of natural intelligence.

‘We will be able to communicate telepathically. When we open our mouth to speak, we transmit only a small part of information that we have in our head. A lesson will be able to be conveyed in a second, because information will be transferred from mind to mind instantaneously,’ José Luis Cordeiro said.

The Costs of Digitalization

Chairman of QBF Corporation’s Board of Directors, Roman Shpakov, noted that digitalization also has costs. Will man be able to overpower an endless stream of information? Maybe Sberbank will soon control our destinies—it will tell us what to buy and what loan to take. In addition, digitalization and automation come with job elimination and unemployment.

Ozcan Saritas said that we should approach all predictions with caution. ‘Today we are talking about cars without drivers. But, maybe, they will be not four-wheeled, but two-wheeled. Although, what difference does it make if we can’t solve the problem of traffic jams?’

After conducting nationwide university competitions as part of the Digital Economy in the Russian Federation Programme, the Russian Ministry of Education and Science has selected a number of Russian universities to launch new international research centres and develop digital university models.

How to move from distrusting everything around you to new mutually beneficial alliances and partnerships? Can we achieve it in Eurasia? The participants of the St. Petersburg International Economic Forum discussed these and other questions at TV debates organized by RT. Sergey Karaganov, Dean of HSE Faculty of World Economy and International Affairs, believes that both Russia and Europe should turn together to the East.

An agreement relating to the programme was signed by HSE and Roscongress Foundation at the St Petersburg International Economic Forum.