HSE Alumna on Her Master's Programme in Dortmund

Annika Razroeva, who graduated with her undergraduate degree in 2014 from HSE’s School of Statistics and Data Analysis, discusses her experience in getting her master’s in Dortmund, Germany. 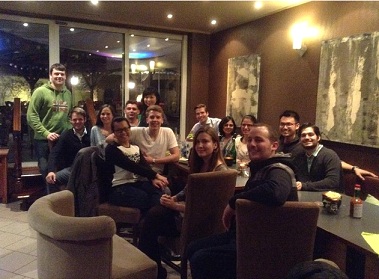 For a long time, I didn’t think studying abroad was for me, as I'm very attached to my family, friends, and home, and I thought I could never leave all of that. But when the time came to think about my master’s, one unexpected conversation with someone who had been studying in America fully convinced me otherwise. I don’t even remember what he said, but I remember not having any doubts after our talk.

I decided on Germany almost immediately. I had studied the language for quite some time, and I really like Germany. I had been there many times and even stayed for a month on three occasions. I can always find a common language with Germans. I did have a hard time deciding on a programme, but after I realised that I wanted to add more applied experiences to the groundwork I had built at HSE, I began looking for finance programmes.

The first semester of my German master's programme ended recently. I study at the International School of Management in Dortmund. Like HSE, the university has branches in a bunch of other cities around the country. Not a lot of people know about it because it’s a private university, but it is among Germany’s top ten (and for some areas top three) finance programmes. I see the school’s main advantage during lectures and seminars, which are sometimes led by the CEOs of various corporations, for example, as well as other people from around the world who are experts in their fields and teach simply because they like to. It’s like a hobby for them. They teach so it’s also interesting for them, and we’re never bored because of it. As far as I’ve been told by friends from state universities, they are mostly taught by academics.

This programme was instantly among my favourites because of the subjects in its academic plan (by the way, not every university lets you see the curriculum, even if you ask again and again), the mandatory 12-week internship, and also because of the fact that one of your four semesters takes place abroad at a one of the school’s partner universities, which ISM has all around the world. There’s also a dual degree programme with certain partners.

To get in, I needed the IELTS (during which, by the why, I realised that the new requirement HSE introduced in 2010 on preparing for the exam in the first two years of study is a great thing!), as well as my transcript, cover letter, resume, and a few recommendations, which you can get from your academic supervisor and an instructor who knows you pretty well. Then there was a practical component. I was sent a case, and I had to submit a solution and presentation, as well as explain everything during a Skype interview. At first it seemed like this was a lot and that it would be hard to do all of this, but when you approach the process sequentially and in an organised manner, everything works itself out. Your eyes might be afraid, but the hands are doing, as they say. So I already knew in April that everything concerning my master’s was decided, and I was able to calmly prepare for my thesis defence.

I’m really enjoying my programme! I particularly like that you can always ask instructors how theory works in real life. This is something I also liked a lot about HSE. At the end of the semester, I had three exams that included seven subjects overall (because subjects are combined into so-called modules).  Everything else comes in the form of term papers, presentations, and other projects. I wasn’t familiar with a lot of these types of activities, but they’re interesting.

I can say that with the groundwork I got at HSE, I feel surprisingly confident, especially in mathematical subjects. Many of the subjects involved intensive classes. For example, our statistics and financial modelling course was held three days a week for six hours each! This was when, after a week, people started getting a seat next to ‘Annika, who studied statistics.’ It was difficult for a lot of people, but I liked it – I got to review my favourite subjects. It’s surprising, but I remember practically everything. So a thank you to our teachers! And I’m always able to get the hang of things I don’t know yet about.

I had big plans for my free time; I wanted to go to Belgium, Dusseldorf, and Cologne, as well as visit my friends in Freudenberg. I was able to do everything except Belgium, but it was all rather rushed because I didn’t have a lot of free time.

I study with some awesome people from all around the world. There are 21 of us: 13 are German, and we have guys from Costa Rica, the U.S., and Switzerland, and girls from India, Ecuador, China, Bulgaria, and of course me. We’ve become such good friends over the three months that we can’t even imagine what we’ll do when it comes time to separate for good! I also really like the fact that we study in such a small group. Everyone got used to one another really quickly, and we feel relaxed, which is why we study more effectively since we’re okay with asking whatever questions pop into our heads. But we do more than just study together – we have dinner together if someone knows of a good spot, we go over to one another’s places, someone is going to travel together, and the girl from India comes over to my place to hang out.

After Moscow, life here seems extremely calm, but I can’t say that this is a bad thing. I don’t have any more time, but there’s no commotion. It seems like you can always stop and think long and hard about what to do next. Even when you have to prepare several presentations at the same time, apply for your semester abroad, look for an internship, and go to interviews while also going to class everyday, it seems like everything happens very sequentially and correctly. Generally speaking, when you can find such a thing five minutes from the city’s largest university, it’s hard to feel rushed like in Moscow.

To everyone thinking about studying in another country, I want to say that the main thing is not to be afraid! Being a pioneer is somewhat scary, but this worked out in the end for so many people! You just have to know for sure that this is your decision and then simply be confident as you do everything you have to. Then everything will work out for sure!