Quality of Enrolment in Technical Universities has Grown Considerably 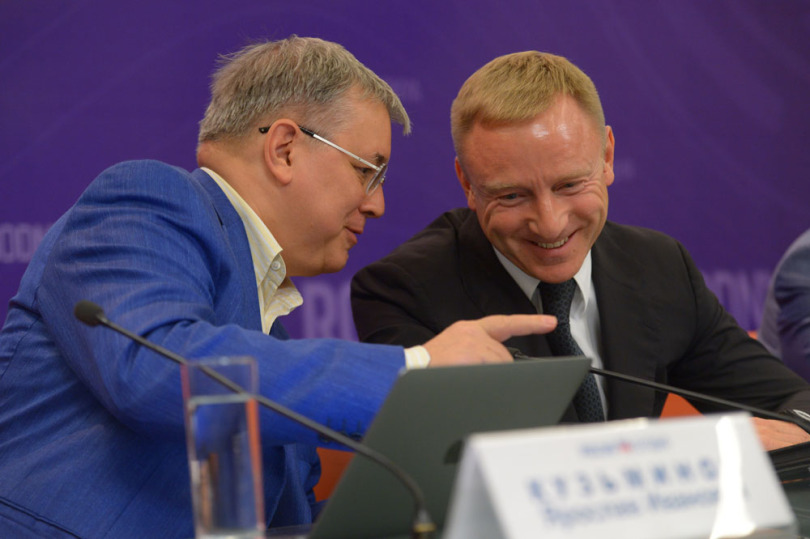 On September 3, 2015, Dmitry Livanov, Minister of Education and Science of the Russian Federation, HSE Rector Yaroslav Kuzminov, and Alexander Biserov, Deputy Head of Rosobrnadzor (Federal Service for Supervision in the Sphere of Science and Education) presented the annual monitoring of the quality of enrolment in the state-funded places of Russian universities in 2015 at Rossiya Segodnya IIA (International Information Agency). Among the top ten universities in terms of enrolment quality, HSE took third place and HSE campus in St. Petersburg took eighth.

This monitoring takes place annually, and has been carried out by an HSE research team since 2009. It is based on data from universities’ websites, but his year it also used data from the Russian Ministry of Education and Science Department of State Policy in Higher Education. The Social Navigator project of Rossiya Segodnya IIA is the study’s partner. The monitoring includes data on 442 higher education institutions, which enroll students mostly on the basis of Unified State Examination (USE) results.

The quality of enrolment is evaluated by the average USE grade among accepted applicants, and uses students enrolled in the first year of undergraduate full-time programmes. A group of leading universities with average marks of over 70 (‘green zone’), and a group of underachieving ones (‘red zone’, with marks under 56) were highlighted.

Competition is growing, and accessibility remains

According to Dmitry Livanov, 324,200 state-funded places were allocated this year for undergraduate students, which is slightly higher than last year. The number of state-funded places in such areas as natural sciences, medicine, and engineering has grown. 56% of high school graduates were enrolled in state-funded places at universities, which means that higher education remains accessible.

As compared with ast year, MGIMO (94.7 grades) and MIPT (93.8) kept their positions in the top ten universities with state-funded enrolment over 300 students and continue to hold first and second places accordingly. Saint Petersburg State Medical University lost its position to the Higher School of Economics (91.5) and fell from third place to ninth. Pirogov Russian National Research Medical University didn’t make the top ten. The average USE grade in the St. Petersburg State University (88.1) is still higher than in Lomonosov Moscow State University (87.1), but now they are in fourth and fifth places accordingly. National Research Nuclear University MEPhI (86.3) moved from seventh position to sixth, and the HSE campus in St. Petersburg (84.6) managed to enter the top ten and take eighth place. Plekhanov Russian University of Economics dropped out of the top ten, and the Financial University (83) entered it. Russian Presidential Academy of National Economy and Public Administration moved from tenth place to seventh (85.6).

Preliminary data as of September 3, 2015.
Prepared according to the data collected by an HSE research team from university websites and data provided by the Russian Ministry of Education and Science Department of State Policy in Higher Education.
School contest winners, who were enrolled without entrance exams, were assigned maximum USE grades (100 per each subject accounted), in line with Ministry of Education and Science recommendations.

Agricultural education is falling behind

Technical universities have considerably increased the quality of their enrolment. Twenty-four universities are in the ‘green zone’, which is eight more than last year. MIS&S, St. Petersburg University of Technology and Design, and Bauman Moscow State Technical University grew considerably. The ‘red zone’ shrunk; it lost nine universities and added only four.

When speaking about agricultural education institutions, one university – St. Petersburg Academy of Veterinary Medicine – entered the ‘green zone’ (for the first time over the monitoring period), and two universities left the ‘red zone’. ‘Universities that train professionals for agriculture showed low attractiveness’, Dmitry Livanov emphasized, ‘Their average grade was 53’.

Generally, the grade for medical universities has fallen slightly, although this is probably an adjustment following the boom in previous years.

What can be done with poor achieving institutions?

Speaking about what is going to happen with universities that found themselves in the ‘red zone’, HSE rector said that it largely depends on the conditions where the specific institution works. Universities in North Caucasus and Russian Far East, where the best graduates prefer to leave for Central Russia, have to work with those who stay.

Dmitry Livanov emphasized that the higher education system not only trains professionals, but provides socialization for young people. That’s why a branched network of universities in various regions should remain, and the differences in the quality of education are inevitable. At the same time, the minister believes, it’s necessary to improve the situation at high schools, to apply long-distance technologies in education, and to increase demands on prospective higher education students.

Best Prospective Students Go to Medical Universities, and Engineering is still out of Fashion

On October 29th, 2014, Alexander Klimov, Deputy Minister of Education and Science of Russia, Alexander Biserov, Deputy Head of Rosobrnadzor (Federal Service for Supervision in the Sphere of Science and Education), and HSE Rector Yaroslav Kuzminov, presented the annual monitoring of the quality of enrolment in Russian higher education institutions. The project was carried out by the Higher School of Economics and the Ministry of Education and Science in partnership with Rossiya Segodnya, an international news agency, and the Public Chamber of the Russian Federation. Below are some conclusions of the study.