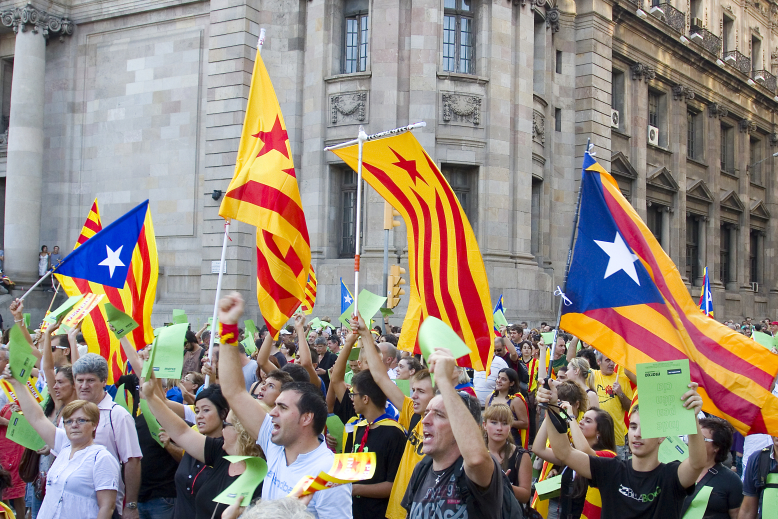 On November 26, 2014 on the invitation of the Faculty of World Economy and International Affairs Professor Luis Moreno Fernandez of the Spanish National Research Council gave a talk on Stateless Nations in Western Europe. The lecture was part of the first session of the European Club launched by the Faculty this year.

The topic of nations’ drive for state-building, particularly in Scotland and Catalonia, has been the focus of Prof. Moreno’s research for over 30 years. Opening his talk, the professor outlined the general situation in Europe in terms of modern types of territorial organization, stressing that there is an obvious trend for pluri-national states, such as Belgium or Italy, to drift from a unitary centralized structure to a compound decentralized one (federal or quasi-federal). What’s interesting is that this is happening alongside the expansion of the European Union. So, as Professor Moreno noted, ‘There are two processes in Europe. On the one hand, supranationalization – the coming together into the European Union, and the other decentralization in countries that were once centralized’.

The expansion of Europe has brought to the fore the problem of a skewed balance of power. It often happens that certain regions, for instance Westfallen in Germany, Lombardy in Italy or Catalonia in Spain, carry much more social, economic or political weight than smaller states that have recently joined the EU but do not have equal decision-making rights. This unfair distribution of rights can be one of the reasons for a nation’s desire to form their own state.

Are Catalans more radical than Scots?

In comparing Scottish and Catalan secessionist movements, Prof. Moreno pointed out a number of affinities and highlighted certain differences. Historically, both regions used to have political autonomy as ethnically structured territories. Recently, there has been a rise in the popularity of nationalist pro-independence parties that have gained a considerable number of seats in regional Parliaments. What’s also important is that Scots and Catalans share the notion of dual nationality that is composed of national identity from the pre-union times on the one hand and post union identity resulting from British or Spanish state formations on the other. This dual identity explains the quest for self-government and independence.

Prof. Moreno posits that ‘the more the pre-union ethno-territorial identity prevails upon modern state identity, the higher the demand for political autonomy.’ Conversely, ‘the more developed the modern state identity is, the less likely it would be for internal conflicts to arise.’ This premise lies at the basis of the ‘Moreno’ question, formulated by the professor back in the 80s to be used in survey polls assessing people’s preferences in terms of their self-identification.

I consider myself as much British as Scottish

I consider myself more British than Scottish

I consider myself only British

Surprisingly the number of Scottish people identifying themselves as Scots only has recently been on the decline while in Catalonia there is a reverse trend, with the percentage of people choosing the answer ‘I consider myself only Catalan’ more than tripling over the last 30 years.

The difference between Catalonia and Scotland is mainly in the position of their respective central governments with regards to granting greater independence to the regions. While the British government has made a pledge to extend the autonomy of Scotland (the so called ‘devo-max’ programme) in practically all areas excluding foreign affairs and defense and agreed to an independence referendum, the Spanish government is strongly opposed to any kind of federalization and does not allow a similar referendum to be conducted in Catalonia. The position of the UK government probably explains the results of the Scottish referendum. With an astonishing turnout of 85% the referendum produced a rather close vote – 45% for independence and 55% against. Meanwhile, in Catalonia, where only a non-legally binding survey poll was done, 85% of participants supported the secession. This is probably due to the fact that more militant voters took part in the poll which had a 37% turnout.

Another important difference between the two regions is in their relative economic weight in the countries. Scotland accounts for 8% of the British population and 8,2% of GDP, whereas Catalonia has 16% of the total Spanish population but is responsible for 20% of its GDP. Therefore, the Catalan population is more in favour of independence than the Scots.

Challenges for the EU

Concluding his talk, Prof. Moreno addressed the challenges facing the EU. The main among them being the question of territorial subsidiarity and the limits of sovereignty. In other words, it has to be determined what decisions can be taken at local or state level and what decisions have to be passed on to higher levels of European government. Naturally, nation-states do not want to transfer more powers to the EU. Another issue is the growing bureaucratization of European institutions and the increasing amount of red tape. Still, Prof. Moreno holds that the federal principle embodied in the EU is still quite strong and there is no immediate threat to European unity.

One Way Towards International Recognition

Sergey Yakovlev presented at 'Joint Education Programmes between European and Russian Universities’ conference. The conference was organized in Moscow by the Delegation of the European Union to Russia.

Dr Natividad Fernández Sola teaches about the EU in the World at the HSE Department of International Affairs and is Professor of International Law at the University of Zaragoza (Spain). She is an expert on European Law and author of a new book 'Reasons for the Current failure of the European Union as an International Security Actor'. Dr Fernández Sola talked to the HSE English News Portal about her experience of being a foreigner teaching in Moscow.

On September 18th 2012, a delegation from the European Research Council (ERC) visited the Higher School of Economics. ERC representatives spoke about how Russian researchers can access the grant programme of the Council.

‘Herding Behavior is Particularly Worrisome in the Banking Sphere’

On the 18th of November, Professor Arnoud Boot from the University of Amsterdam gave a public lecture at the inaugaral ICEF International conference. Its title was ‘Banking at the Crossroads: How to deal with Marketability and Complexity?’