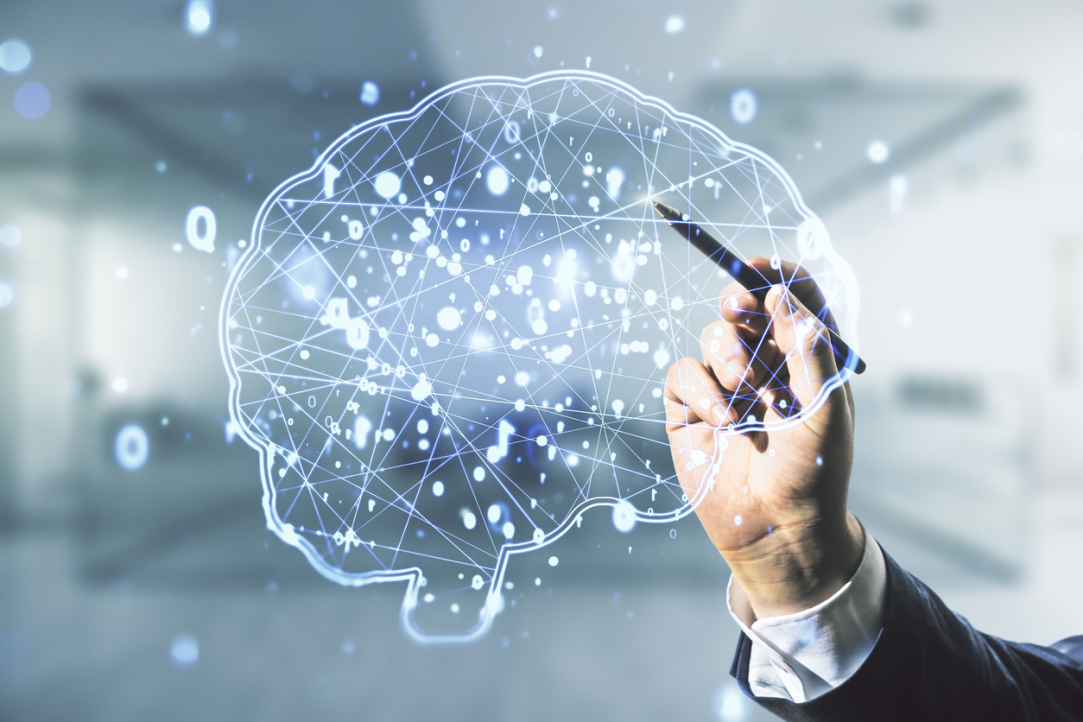 Researchers from the HSE Centre for Cognition & Decision Making have developed a computational model of working memory and demonstrated the stabilizing effect of gamma oscillations, as well as the importance of fast interaction between the model components. The study results have the potential to become part of a theoretical basis for experiments on improving working memory functions with non-invasive brain stimulation. The study was published in Frontiers in Neural Circuits.

Human memory has a complicated structure that allows the brain to store information at various timescales. When it is needed to perform actions based on information that is currently unavailable to sensory organs, the human brain relies on working (short-term) memory. We need it to perform reasoning, reflect, understand complex information, and make decisions.

The human brain constantly produces electrical activity. Neurons are the brain cells that exchange information using brief electric impulses (spikes). When information is retained in working memory, neurons in the prefrontal cortex are in the active state characterized by an increased firing rate (i.e. rate of spike generation). In addition to the spiking activity of individual neurons, working memory also relies on the collective rhythmic activity of brain neural networks in different frequency bands.

Among the various types of brain rhythmic activity that are observed during working memory retention, gamma-band oscillations seem particularly interesting. The gamma band spans the frequencies of brain oscillations from 40 to 170 Hz. Gamma activity indicates the activation of neural networks and coincides with the periods of increased firing rate in these networks. While information is retained in working memory – when the stimulus is no longer present but information about it is required for a further decision – an increased intensity of gamma oscillations is observed. This stands in contrast to the background state when there is no need to retain information in the working memory.

There are many computational models of working memory today, most of which are based on neural networks with multiple steady states. In the simplest case, the system has two steady states: the background state with a low firing rate (which corresponds to the absence of information in the working memory), and the active state with a high firing rate (which corresponds to the retention of information in the working memory). The transition from the background to the active state is triggered by an external impulse representing a to-be-retained stimulus. Recent research has demonstrated that the active state is stable only during short periods of time (this phenomenon is called ‘metastability’). In addition, it is known that the processes related to working memory retention are not localized in one area but distributed across the cortex.

In their paper, the authors considered a working memory model that contains a set of neuron populations linked by excitatory connections. The researchers assumed that the information about the presented stimulus is delivered to many populations of the prefrontal cortex, but only some of them participate in the stimulus retention assembling into a single functional network. Each population receives an input from the whole network: that is why various parts of the network receive similar input signals. This was modeled as a common noise input into some of the modeled populations (the remaining populations receive independent noise inputs).

Each of the populations had a stable background state and a metastable active state. The stability of working memory retention was evaluated as the average time in which a population returned to the background state after the presentation of a stimulus. The authors demonstrated that the retention is more robust in the group of populations that receive a common noise input as compared to the group of populations that receive independent noise inputs. The authors also discovered that gamma-band input caused working memory stabilization and amplified the difference between the two groups of populations, thus increasing the ‘fidelity’ of the retained information. The effect was most evident when the connections between the populations were fast and the gamma input was delivered to each population in the same phase. 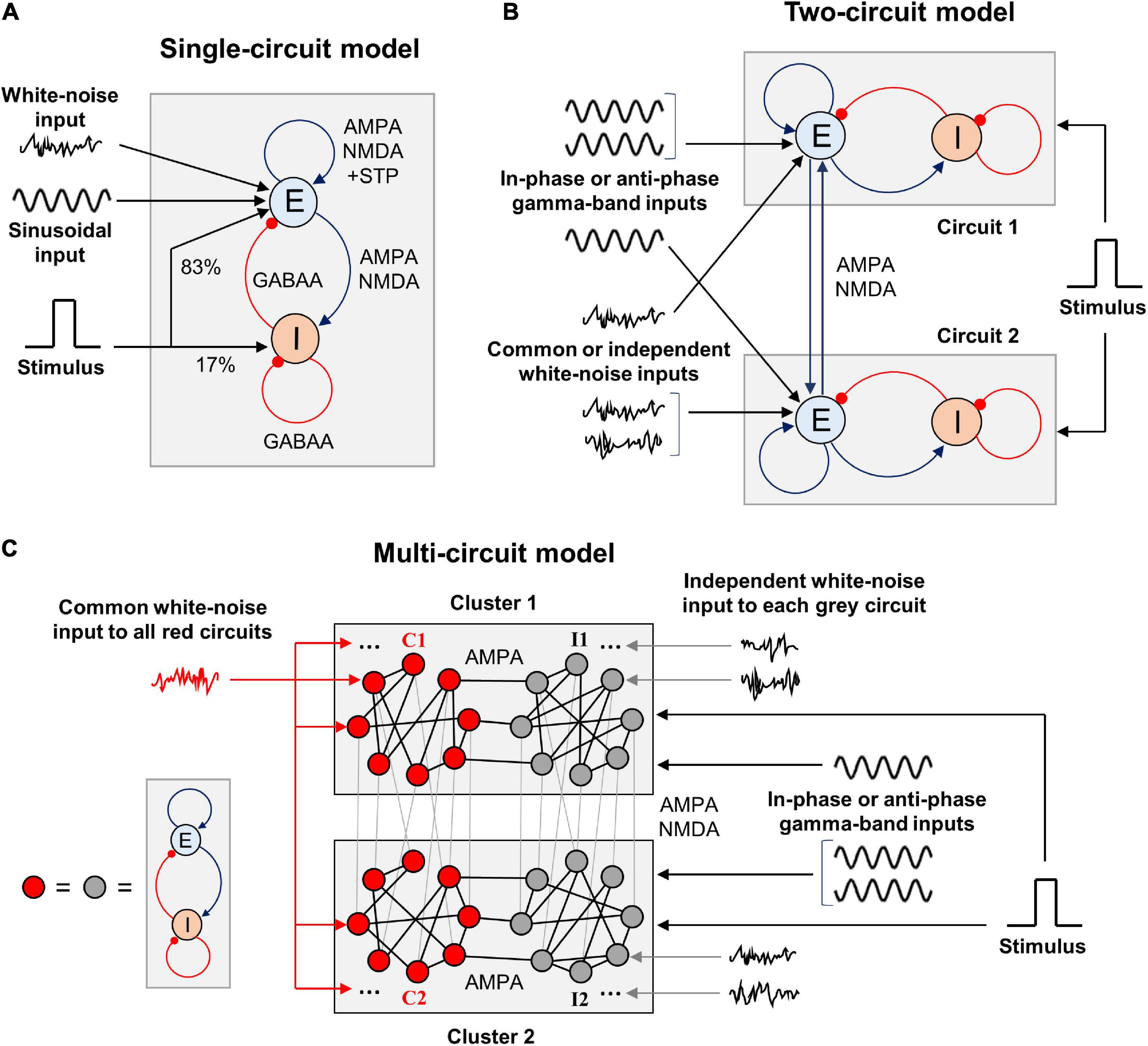 Fig. 1. The proposed working memory model. The circles represent neural populations; the lines represent symmetrical excitatory connections. The ‘red’ populations receive a common noise input; the ‘grey’ populations receive independent noise inputs. All the populations from each cluster receive gamma-band input in the same phase; the inputs to the clusters could have either the same phase or the opposite phases. Connections inside each cluster are fast; connections between the clusters could be either fast or slow. The to-be-memorized stimulus was delivered to all populations.

Currently, the theoretical understanding of the role of brain oscillations in working memory is falling behind the accumulated experimental material. The paper by HSE researchers contributes further to the development of the theory describing oscillatory control of working memory processes. 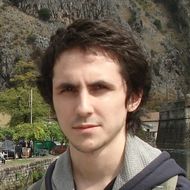 Our paper continues the series of theoretical studies that explore the link between neural oscillations and working memory, expanding the current understanding of this link. For example, classical papers in this field indicated the destabilizing role of oscillations and the importance of slow neural interaction for working memory retention. In our paper, we demonstrated the opposite effect — the stabilizing role of the oscillations and the importance of fast interaction. The results we obtained have the potential to become a part of the theoretical basis for experiments on improving working memory functions with non-invasive brain stimulation. 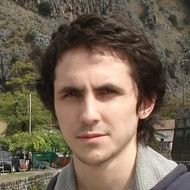