Conference members stressed that the chosen theme was also very relevant because management models that had previously been considered exemplary, democratic models are experiencing a crisis today. One of the meeting’s objectives was to look for those nuggets of experience in the transformation of various countries that could be applied to Russia’s development.

In his just-published report ‘The Rise and Fall of Democracy? Meritocracy?’, Ivan Krastev, a researcher in post-Communist situations in Russia and Eastern European countries, set the main topic of discussion: whether democracy, which is supposed to minimize the number of administrative mistakes made and allows the majority of citizens to participate in decision-making through a system of representation, is that perfect.

Sergey Karaganov tried to explain the reasons for the current crisis and drew attention to the fact that Russia has gone through 20 years of post-revolution development without realizing where it is going and why. It was back then that the development of human capital needed to be invested in. ‘A big mistake was that, for political reasons, we carried out mass privatization in order to break communism’s back, but we didn’t realize that property without law would never be legitimate. We didn’t understand ourselves and the losses that would result from taking that step’, believes Karaganov.

Speaking about why we are experiencing a global crisis of democracy today, Karaganov said that it is partly due to a global leadership vacuum: ‘Leadership has passed away: we’ve lived 60 years without a war, without the threat of major social catastrophes. Thanks to the presence of nuclear arms, the threat is gone, and the requirements for leadership have shrunk’.

The feeling that democracy is in crisis only today is false. Democracy has always been under pressure and related to the legitimacy of power, believes Shlomo Avineri. The legitimacy of power is created by everyday routine work, which doesn’t have an instant effect. In Russia, the question of legitimacy is very serious: if those in power don’t report to the citizens, the gap between the ruling class and the people will grow. But, this is also a problem for the ruling elite, since without appropriate control, it becomes more and more autocratic.

Boris Makarenko, Professor at the HSE and Chairman of the Board for the Center of Political Technologies, said that only meritocracy has given democracy a measurement tool – competition, which determines who is to be considered ‘worthy’. The majority of society has received the right to compete for the distinction of being considered ‘worthy’. Democracy has become inclusive.

Andrey Melville emphasized that everyone is talking about the crisis of modern democracy. He believes that ‘overcoming a crisis by entering into a new crisis is how democracy works. Its objective has always been to overcome these crises’.
Date
1 July  2013
Topics
Research&Expertise
Keywords
democracylegitimacy
About
About persons 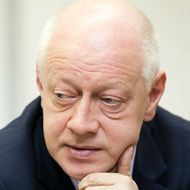