The Iron Egg is awarded annually to the winners of a student vote for their contribution towards extracurricular life at the university. For the first time ever, this year’s awards ceremony took place in a new interactive format with students selecting not only the best student organisations, but also the best journalistic work by a university media source, as well as most active student.

The history of the Iron Egg prize is connected to the university’s main prize, the Golden HSE award. This award previously included a category for ‘Best Extracurricular Project,’ and the winners were given a golden crow statuette. This category was done away with in 2003, and students created their own award.

The list of award categories changes every year, and this concerns not only their contents, but their quantity as well. ‘There were six nomination categories for the 2015 Iron Egg if I’m not mistaken. In 2017 we decided to increase this, but it was as if we wanted there to be one for everybody, but students were really only interested in the In Style category,’ notes Elizaveta Vlasova, the coordinator of the 2018 project. ‘This year we made it so that every category met the ‘in style’ criteria. We weren’t aiming to give an award to everyone so no one’s feelings were hurt; we wanted to shed light on the very coolest, brightest, and relevant things that happened at HSE over the last year.’

In 2018 the award was given for six categories, a few of which had never existed before: Student Organisation of the Year, Female Student of the Year, Male Student of the Year, Project of the Year, Article of the Year, and Party of the Year. The format of the awards ceremony itself changed, turning into an interactive show with the theme ‘Your Story’ and whose participants were guests and audience members from the ceremony. ‘The old format of stage plus concert seating had long become boring for participants and event organisers,’ Elizaveta explains. ‘Before, we ran everything like a well-oiled machine – hosts, dance and musical numbers, and the awards ceremony. We decided to keep pace with the times and try something new – at the height of popular immersive performances and interactive events, where each person can take part in what’s happening.’

During this year’s awards ceremony, actors (HSE students, Ingroup CTC participants, and performers with the HSE Theatre) performed ‘novellas’ – stories about love, friendship, priorities, fear of new things, and also about how important it is to dream and never give up, all things with which every student is familiar. There was no real host, but the evening’s ‘MC’ was an off-stage voice that guided guests through the entire event.

‘Everything took place thanks to the efforts of HSE students and their friends, with the exception of the dance numbers, for which we got help from the Art of Motion team,’ Elizaveta Vlasova continues. ‘We wanted each person to be able to see a part of themselves in the novellas, and thereby show that extracurricular activities are open to everyone. During breaks, the actors interacted with the public; in one novella, for example, the audience was asked to come up with a list of priorities and from this choose the things that are important. In a different novella, we asked people to turn on their flashlights if they would open the door to an uncertain future.’ 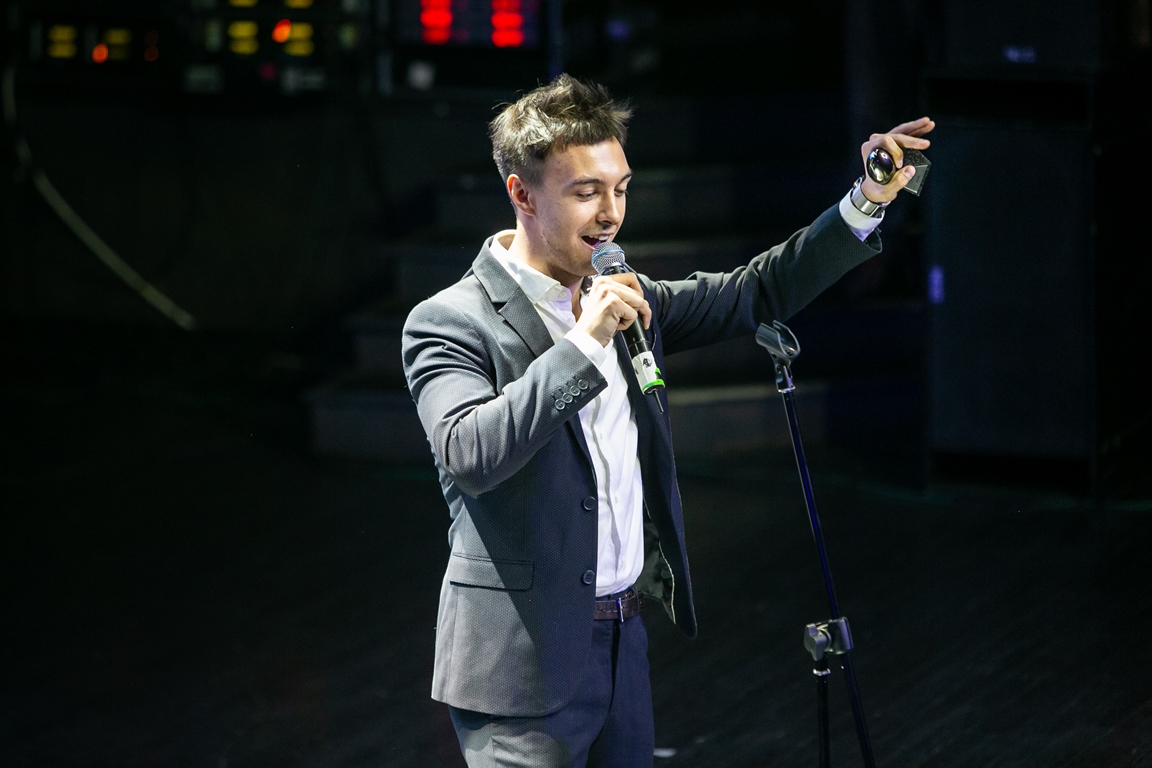 Viktor Tint, a fourth-year student in the undergraduate Sociology programme and the winner of the Student of the Year award, discusses what it’s like to organise large-scale events at HSE:

I have been taking part in different sorts of projects since September 2015. My first one was the initiation ceremony for sociology students in 2015, followed by the Peach Team student activity hosted by the HSE Faculty of Social Sciences. In 2017 I founded the HSE Production Centre, which carries out broader university events. At first we organised two VYSHKA TUSIT parties (500-800 people), and after this university administration entrusted us with the organisation of a university-wide prom, which 2,500 people attended. I began my new project, Audience, in March. It involves TED lectures and a party, and our second event is taking place on June 15 at Kub, which is in the Flacon Design Factory. In addition, I brought back a sound recording and rehearsal studio in mid-2017 and founded the HSE STUDIO student organisation, which has organised the musical portion of HSE Day, as well as the Whole World at HSE festival. Alongside this, I worked at an advertising agency for large brands like McDonald’s, Unilever, Coca-Cola, and more.

Throughout all of this, I have gained experience managing teams of between three and 40 individuals, as well as experience organising events, building strategies, and conducting PR and SMM. I can now carry out any project for HSE’s audience (students and alumni), and I have additional experience producing large-scale events. With this background, I was able to become an event manager for the Gamma festival in summer 2017, which takes place in St. Petersburg and involves up to 10,000 attendees.

Participating in extracurricular life allows you to gain some incredible experiences. Here students can find and prove themselves, all while meeting many talented HSE students and alumni who they’ll be friends with, and possibly colleagues, in the future.

Video from the Awards Ceremony (while it doesn’t convey all of the emotions felt during the event, it does give a snapshot of how the ceremony took place):

Winners of Iron Egg, the biggest student award, have received their prizes. This year, 33 student associations competed in 11 nominations in the contest finals.