The hackathon was organized by the HSE Faculty of Computer Science together with SAS and the Utkonos online hypermarket. Within 23 hours, the final teams of the qualifying stage had to use behavior data from the store website in order to predict how long it takes a customer to change his or her mind and cancel an order.

The task of the final round was in many ways a more complicated version of the qualifying round’s task. In the final round, teams had to perform data analysis in order to predict the probability of whether a customer would cancel his or her order in the first place. ‘Cancelled orders are a big problem for online retailers,’ says Danila Naumov, Director of the Utkonos company. ‘For a long time Utkonos was the only online grocery delivery service. The emergence of a large number of competitors a couple years ago prompted us to work on digitally transforming our company in order to improve our services and optimize internal processes.’

If a customer cancels their order after it has been processed and prepared for delivery, the company incurs financial losses. In addition, the items are blocked to other users, so there is also the so-called lost demand. What’s more, perishable food items that were in the warehouse and then went out for delivery and driven around the city for nothing have to then be written off or sold at a discount. 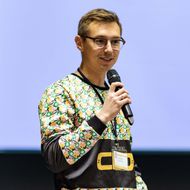 It was difficult for us to choose a task for the hackathon, since most of our practical cases require an understanding of the specifics of the business. Creating a model isn’t enough—we need something that can be put into use. In order to come up with a different way of doing things for a business, one needs to have special knowledge.  In the task we designed for the hackathon, there was more opportunity for creativity and putting one’s data science skills into direct use.

In the final round, the accuracy of the resulting models played a large role; we ranked the teams according the number of errors they made. In addition, in the presentation stage, teams could earn up to 2 points for the model’s applicability and the quality of their presentation. In my opinion, 50% of success, and sometimes more, depends on emotional intelligence. It is necessary to be able to communicate with contractors and to successfully pitch your idea to the business.

First place in the hackathon went to a developer from Norilsk, Dmitry Fedotov. He found that the biggest sign of order cancellation is the presence of similar orders for the same delivery date in the user’s account.

Dmitry was able to most accurately interpret most of the data. ‘I have been participating in hackathons for half a year now: I’ve done 15 online competitions and three offline. I don’t know anyone from Moscow, so I’m a team of one. The final round coincided with some vacation time, so I decided to travel to Moscow for it, and I do not regret it – the task was really interesting and the competition was well organized,’ says Dmitry.

Ilya Gorshkov, a master’s student in ‘Data Analysis in Biology and Medicine’ at HSE, took part in the hackathon for the first time. He was also a team of one and took second place. Third place went to two teams of adult developers, and fourth and fifth places went to student teams from Moscow State University.

According to Elena Schenyavskaya, a representative of SAS Russia / CIS, she and her colleagues were interested in hearing the participants’ new ideas and telling them about their internship programme. ‘Hackathons allow you to gain experience solving problems, develop your own style, and evaluate how a particular model manifests itself in practice,’ says Elena Schenyavskaya.  ‘In fact, any of the hackathon participants could test their hypotheses with two clicks in our programme, which is also available to students, but they preferred using Python. SAS provides business software that helps people without programming skills develop complex models. Thus, even business analysts without special knowledge have the opportunity to get a decent result using the data mining model.’

After the award ceremony, team members who had advanced to the final round received job and internship opportunities from the organizing companies.

The awards ceremony for the winners of the Data Analysis National Olympiad (DANO) has taken place at the HSE Cultural Centre. This is the second time the Olympiad has been held, and was organized by HSE University together with Tinkoff. About 7,000 participants from different regions of Russia and 13 other countries took part in the event. Those coming in the top 25 of the individual ratings will be able to study at HSE University for free.

Data analysis enthusiasts from different regions of Russia and 13 foreign countries recently took part in the Data Analysis National Olympiad (DANO). The results of the first round will be announced on October 20th.

At the beginning of July, the Data Science and Business Analytics programme at the HSE Faculty of Computer Science held its first graduation ceremony. Most graduates have already found jobs in various fields—Data Science, development, product management, systems analysis, and so on. Many of the bachelors plan to continue their studies at the best international and Russian universities, but they are not going to say goodbye. ‘We have been and will always be one big team,’ they say.

In August 2018, the HSE Faculty of Computer Science launched a Joint Department with SAS, a world leader in analytics software. The Department’s objective is to provide better training for future data experts. The HSE News Service reports on the ideas that have come to fruition and how academic teaching is combined with hands-on training there.

The HSE Faculty of Computer Science, Yandex, and Otkritie Bank are holding the fifth International Data Analysis Olympiad (IDAO). There will be two competition stages: the qualifying round will last from February 1 to 28, 2022, and the finals will take place from April 16-17. Registration for the event is already underway.

IDAO 2021 Qualifying Round Comes to a Close

30 teams have advanced to the finals of the 2021 International Data Analysis Olympiad (IDAO) after passing the qualifying round, which was dedicated to the search for dark matter.

The registration period for the International Data Analysis Olympiad (IDAO-2021) is open until March 12. The qualifying round has already begun and will run until March 31. This year, the HSE Faculty of Computer Science and Yandex are holding the Olympiad for the fourth time. This year's Platinum Partner is Otkritie Bank. The Olympiad is organised by leading data analysts for their future colleagues—early career analysts and scientists.