Labcitoyen is an international programme devoted to civil society issues. The themes of the 2015 Labcitoyen were human rights and environmental problems. To take part in the competition, participants had to write an article in French describing a specific example of how climate change impacts human rights violations in Russia. In her work, ‘The Arctic without Snow,’ Tatiana Shakhova researched how melting permafrost affects the health of indigenous peoples of the North.

At the conference, which is part of the 10-day programme in Paris, an international team of students will be asked to reflect on the connection between environmental problems and human rights, as well as on the impact of civil initiatives and the application of fundamental human rights. 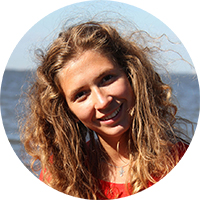 Tatiana Shakhova, Third-year student in the Faculty of World Economy and International Affairs

‘When I saw the results, I didn’t believe I had won at first. It’s great when your work is recognized as the best. It means it contains something special that caught the committee’s attention. But it’s even better when your work gives you the opportunity to travel to Paris for 10 days. I’m sure to have an invaluable experience by participating in international conferences, debates, and workshops devoted to the consequences climate change poses for society and the threats these consequences carry for human rights around the world. Discussions will be held in French in an incredibly beautiful city with students from countries all over the world. Quite honestly, I’ve always dreamt of participating in this sort of event. And the fact that this year’s topic is connected to climate regulation and resolving ecological problems is another dream come true. It’s awesome that students are given such a wonderful chance to express their opinion, propose their own solutions, and most importantly, hear what people from other countries have to say. A huge thank you to the instructors from the French Department for their years of teaching and personally to Associate Professors Irina Barteneva and Marina Levina for their advice in preparing the article!’

Maria Belousova, an applicant from Uzbekistan, will become a first-year student at HSE University in autumn 2021. She will study at the HSE University Moscow campus in the School of Foreign Languages. The  News Service asked Maria why she chose HSE University, why she was interested in her chosen educational programme and how difficult it was to apply for University remotely.