On December 11th, 2012, the youth forum ‘Caucasus 2020’ took place at the HSE. The event was organized jointly by the HSE Chamber of Nationalities club and the Association of World Economy, a student organization. Viktoria Nosik, second-year student of the HSE Faculty of Media Communications, covered the event for the HSE News Service.

Friendly relations between different ethnicities, tolerance, ethnic and confessional identity, mutual understanding and willingness to talk – are these words important for every Russian or are they just empty phrases? What is the reason for ethnic conflicts in Russia and is it possible to overcome them? These problems were in the focus of the forum where, in addition to students, authoritative experts in ethnic relations were invited, including Maxim Shevchenko, Geydar Jemal, Grigory Shvedov and others.

Each expert focused on aspects which seemed the most important to him. For example, Grigory Shvedov, editor-in-chief at the Kavkazsky Uzel (Caucasian Junction) magazine, emphasized that the problems of the North Caucasus, such as corruption or the crime rate, are often not regional, but a nationwide problem. And, of course, social problems are closely connected with the economy. The economic situation in North Caucasus is a difficult topic for discussion, and it will take time to stabilize the economy. For the moment, the money assigned for certain projects disappears elsewhere, and the problems remain unsolved. Fighting corruption, unemployment and the black market, while encouraging industrial development, - everything is intertwined here, and the new generation of regional leaders will have to solve these issues. That makes the issues of education, social responsibility, and instilling a proper system of values in young people even more important. 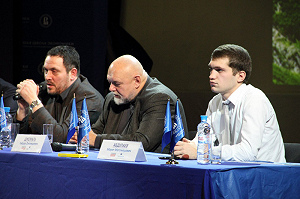 With this understanding, the forum organizers dedicated one of the sessions to the role of youth in implementing the State Ethnic Policy Strategy, a project prepared by the Council of Ethnic Relations following an order from the Russian President. Kantemir Khurtaev, chairman of the Moscow Union of Student Communities, and one of the experts in State Ethnic Policy Strategy development, spoke at the forum about the growing hostility among young people as a result of some deep social problems which have proved very difficult to solve. One of the main problems, according to this expert, is social differentiation.

The role of mass media in fomenting mutual ethnic hostility cannot be underestimated. Any provocation presented by TV or a large website as ‘aggression from people from the Caucasus’ and ‘uncompromising ethnic hostility’ can be an incentive to new conflicts and worsen the situation. But the deliberate suppression of the existing problems is also not an option, since it may lead to growing distrust and tension in society.

Young people react to social changes faster than any other demographic group, and their protest and support is more active. That’s why organizations working with interethnic policy pay such close attention to the young generation.

The proportion of interethnic marriages in Russia varies widely depending on ethnicity. How common mixed-ethnicity families are depends largely on couples' ability to overcome cultural, religious and social differences between their ethnic groups and also on settlement and migration patterns. In his ground-breaking research,  Eugeny Soroko , Senior Research Fellow at the HSE Institute of Demography, measured the relative ‘distances’ between ethnic Russians and ten other ethnic groups using a tool he invented – the mixed family matrix.

Centre for Youth Studies in Glasgow