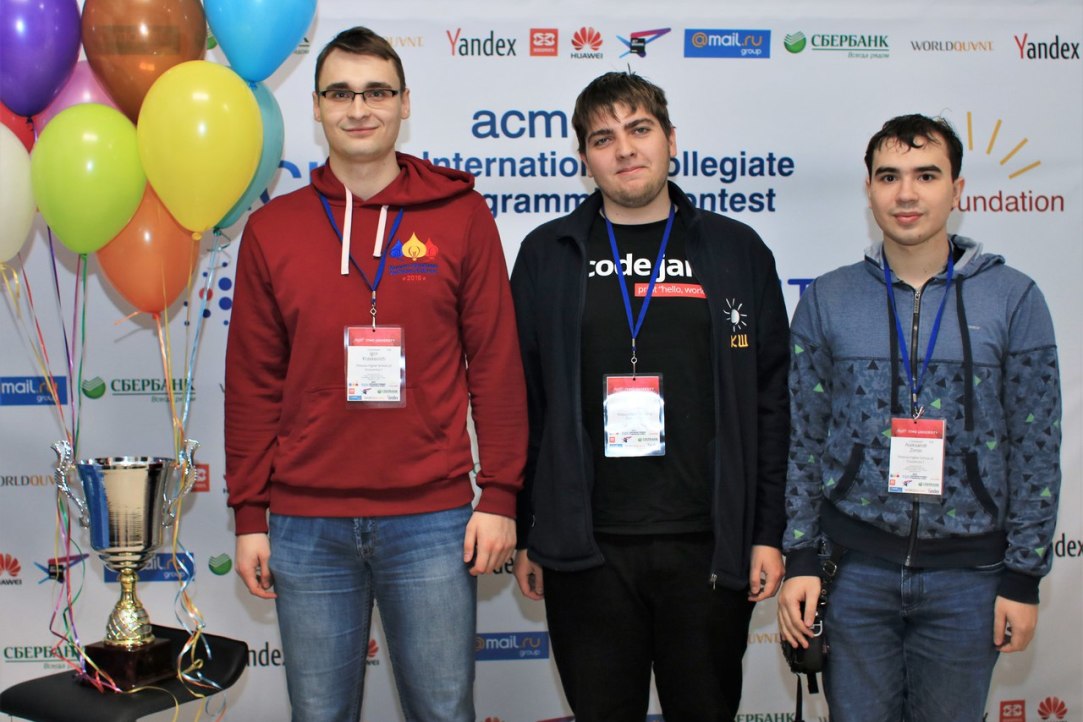 HSE student team: Alexander Zimin (Faculty of Mathematics), Timur Iskhakov and Igor Kraskevich (both from the Faculty of Computer Science)

The ACM International Collegiate Programming Contest (ACM-ICPC) is held annually under the auspices of the Association of Computing Machinery. What began in 1970 as a competition between a few colleges in Texas is now a world-wide competition bringing together more than 46,000 students from three thousand universities around the world. ACM-ICPC comprises several stages, including regional qualifying rounds, the winners of which go on to compete in the international final. Teams from HSE and other Russian universities were selected to compete in the Northern Eurasia heat which was held December 2-3, 2017.

Every team competing in the ACM-ICPC is made up of three students, whose task is to solve a series of problems over a period of 5 hours. The winning team is the one that can solve the most problems in the least amount of time. HSE was lucky enough to be represented by 5 teams at the Northern Eurasia qualifying round this year. One of the teams, comprising Alexander Zimin (Faculty of Mathematics), Timur Iskhakov and Igor Kraskevich (both from the Faculty of Computer Science) successfully qualified for the world finals.

It gets better: not just one, but two teams from HSE will be competing in the world finals next year. Three students from the Faculty of Computer Science (Nikita Zetilov, Andrei Kashin and Roman Aleksandrov) were set to participate in the 2017 final in Rapid City (USA). Unfortunately, visa issues for one of the students meant that he couldn’t attend, which left his teammates decidedly disadvantaged on the day of the competition. Luckily, the ACM-ICPC organizers took this into account and have awarded the team a second chance and a second invitation – a ‘wild card’ entry to the 2018 finals. Both teams will head to Beijing to represent HSE in April next year!

HSE students won prizes in several categories at the 2 day Data.gov.ru Hackathon #2 at the Analytical Centre for the Government of the Russian Federation.