ISSEK Held an Open Day for the Master’s Programme in Governance of Science, Technology and Innovation

On April 8th  the HSE Institute for Statistical Studies and Economics of Knowledge held an Open Day for the Master’s programme 'Governance of Science, Technology and Innovation'. The prospective students met the programme’s administrators, their future teachers, and possible employers: the presentation was attended by prominent members of the business community and government agencies. 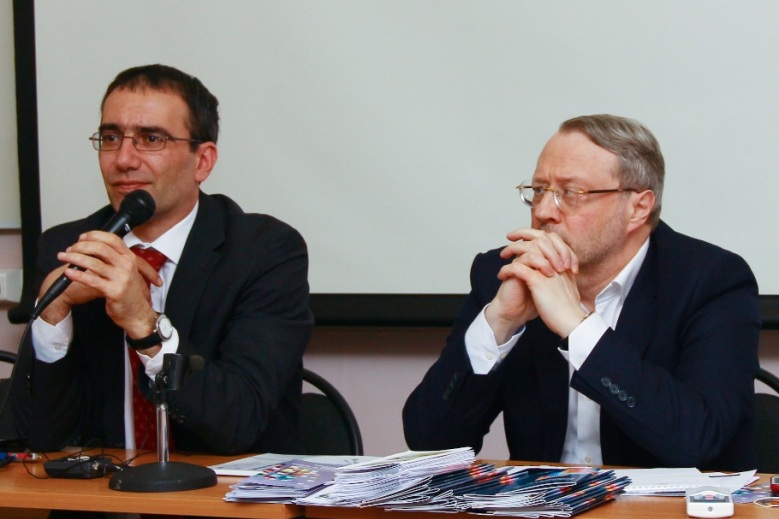 On April 8th the HSE Institute for Statistical Studies and Economics of Knowledge held an Open Day for the Master’s programme —  it’s launching in the new academic year — Governance of Science, Technology and Innovation. The prospective students — quite interested judging by their questions — met the programme’s administrators, their future teachers, and possible employers: the presentation was attended by prominent members of the business community and government agencies.

‘The agenda we’re proposing for your future professional activities is highly relevant to the current economic situation’, noted first vice-rector, director of HSE ISSEK Leonid Gokhberg, and he outlined possible areas for the students to apply the skills they would acquire on the course, citing a number of examples that describe the work of ISSEK itself.

Modernising socio-economic development through technology, both in Russia and in the rest of the world, is a cutting-edge area of business policy and practices, stressed Gokhberg. We need to engage government, big business and international organisations in complex discussions about how to develop and apply the tools for an innovation-based economy. The recent HSE XV April International Academic Conference on Economic and Social Development  showed that key top-level stakeholders are ready for such dialogue. At a round table Prime Minister Dmitry Medvedev joined a discussion with HSE executives and leading ISSEK experts on technological modernisation and developing incentives to promote innovation. And earlier in the year, in January, the prime minister approved the Russian S&T Foresight for 2030 commissioned by the RF Ministry of Education and Science and coordinated by the Higher School of Economics.

As the RF government’s expert and analytical support base, the HSE and its largest research arm — the Institute for Statistical Studies and Economics of Knowledge — regularly cooperate with leading government ministries and other agencies, regional administrations, development institutes and large companies. This defines several important aspects of  ISSEK’s Master’s programme “Governance in Science, Technology and Innovation”.

Deputy Head of ISSEK’s Laboratory for Science and Technology Studies Dirk Meissner is head of the programme. He explained its structure, principles, and curriculum.

1. Applied research-oriented studies. A major element of the programme will be research seminars, and discussions of case studies to analyse the pratices of real Russian and international companies. About 40% of teaching will come from recognised and highly experienced business and government executives, invited specially for the course. ISSEK maintains regular contacts with such organisations as Russian Venture Company (RVC), Gazprom, Rosneft, Aeroflot, RUSNANO, etc.

2. Evidence-based management. In the knowledge-based economy it’s important to be able to make decisions grounded on analysis of big data, and to have the skills to use cutting-edge tools to process information.

3. Multidisciplinary approach. The programme is open to bachelors and graduates of specialised training programmes in a wide range of fields from management, public and municipal administration, economics, global economy and international relations, to sociology, political science, law, natural sciences and engineering. The knowledge the students acquire will be universal, to a large extent at the place where all those fields come together.

4. Combining two educational trajectories: science, technology, and innovation management and policy is a feature making the ISSEK MSc programme different from other similar Russian and international educational projects.  Jonathan Linton, professor at the University of Ottawa and head of the NRU HSE Laboratory for Science and Technology Studies, told the audience about the problems he experienced when he decided to acquire management qualifications on the basis of an engineering background. He found management of research-intensive spheres and policy development to be totally isolated from each other in North America.

The following top managers, responsible for innovation in government agencies, companies, and development institutes, were invited to the presentation: Maxim Nedzvetsky, Head of the S&T Section of the Prospective Development Department at Gazprom, Igor Agamirzian, General Director and Chairman of the Board of Russian Venture Company (RVC), Nikolai Toivonen, Director of the RF Ministry of Education and Science’s International Department, Richard Burger, Research and Innovation Counsellor at the Delegation of the European Union in Russia. The guests admitted that there is enormous demand for people with such broad but still very rare skills.

The audience was introduced to some of the teachers of the Master’s programme courses,— Foresight Centre director and deputy director of ISSEK Alexander Sokolov, and his deputies Oleg Karasev (who is in charge of corporate foresight projects) and Alexander Chulok, head of S&T Foresight department.

Students who enroll on the Master’s programme can join in the work of the HSE international research laboratories at ISSEK. The Laboratory for Economics of Innovation headed by the classic of British foresight studies, professor of the University of Manchester Ian Miles, was represented at the Open Day by leading research fellow Thomas Thurner. Professor of the University of Ottawa and editor-in-chief of  Technovation  Jonathan Linton and leading research fellow, professor of the Institute of Innovation Research at the University of Manchester, editor-in-chief of  Foresight Ozcan Saritas spoke on behalf of the Laboratory for Science and Technology Studies. The laboratory’s senior researcher Anna Sokolova answered many of the questions that arose at the meeting. Anna Rodionova, manager of the Master’s programme whom the students also met at the presentation, will be able to answer other questions later on.

A full version is available on the ISSEK website.

By Anastasia Popova and Elena Gutaruk

Facts about Students in Science

Research plays a growing role in the educational process of the country’s leading universities. The HSE Statement of Values, for example, underscores its importance, stating: ‘Our lectures and textbooks reflect cutting-edge academic research; our academic articles, student papers, models and experiments seek to expand the horizons of contemporary academic inquiry.’ In honor of Students’ Day, we present a selection of facts about the connection between study and science in Russian universities, and specifically at HSE. (Sources: Monitoring of Education Markets and Organizations (MEMO), Monitoring Survey of Innovative Behavior of the Population (MSIBP), additional materials of the Institute for Statistical Studies and Economics of Knowledge (ISSEK), as well as results of a survey by the HSE Centre for Institutional Research (CIR).

Who Studies Russian Science and How?

On February 8, Russian Science Day, the Higher School of Economics, along with the Russian Federal State Statistics Service (Rosstat) and the Ministry of Education and Science, released its annual statistical data book on the state of science, technology, and innovation. Below, the Director of the HSE Institute for Statistical Studies and Economics of Knowledge and HSE First Vice Rector Leonid Gokhberg discusses how research on science in Russia is advancing.

The annual foresight courses which have been running at Manchester University since 1999 are considered some of the most prestigious and important for researchers of the future. In July 2015 two researchers at the Foresight Centre at ISSEK who have been students on the courses themselves have been invited this year to come and teach.

Foresight: Moving from the Future to the Present

Russia is beginning to develop a system of strategic planning. One of its elements is foresight of science and technology development. What place does foresight occupy in this system, and how can its results be implemented? In an interview for the Science and Technology in Russia project, First Vice Rector of HSE and Director of its Institute for Statistical Studies and Economics of Knowledge (ISSEK) Leonid Gokhberg explained why Russia needs foresight.