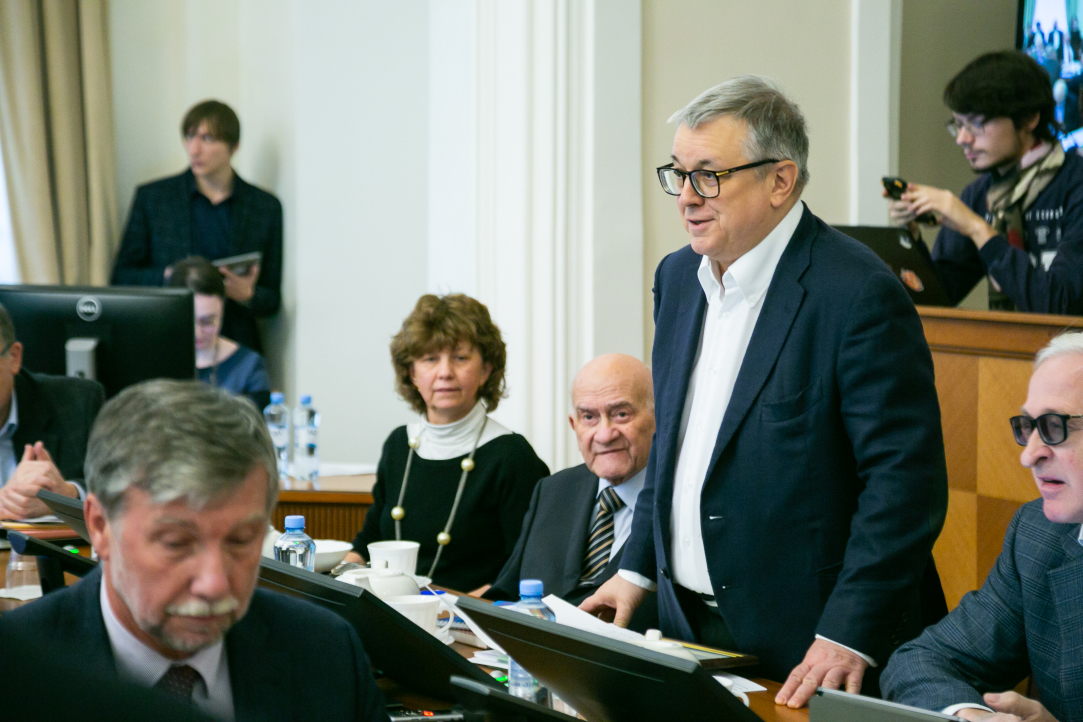 What’s in Store for HSE University

‘Two-thirds of HSE faculty members have published their work in international journals. This is a fantastic figure for our university,’ said Yaroslav Kuzminov in his opening remarks to the Academic Council. ‘However, researchers are no longer communicating with each other like they used to. We have eliminated departments that did not optimize the potential of our faculty members. But the schools within our university are also divided into interest groups. In academic research, we should endeavor to undertake large-scale collaborative projects. And these projects should include not only our colleagues, but our students, because we are a teaching university.’

‘This ranking was determined by a sample of people, half of whom have never even attended university —they have only heard about them,’ he said. ‘We are only 27 years old, and this ranking is an indicator of what we have become for our country. HSE has become an integral part of what our country is proud of. This is a significant result and an impetus to look at ourselves and what we do in a new light.’

Yaroslav Kuzminov noted that HSE University has gone through several stages in its development and now ranks among the top 200 universities worldwide in many subject areas.

Using our own funds, we have invested twice as much of what we received from the state budget towards our development

The rector noted that the university is now undergoing a new stage in its development that requires a new educational approach. ‘Now we must put project activity at the heart of our educational model and get students involved.’

The second challenge, according to Yaroslav Kuzminov, is digital education at HSE: ‘We invest a billion rubles a year in digitalization. This will help the university move beyond the routine approaches that make education boring. Digital methodological tools will improve the academic performance of students in subject areas that do not specifically interest them.’

The rector also noted the need for a personalized approach to each student. ‘One student may be more of a creative thinker, while another may be more logical. Digital tools allow us to assign tasks that are tailored and therefore more interesting to our students.’

Education – both basic education and higher education – should be more tailored to the student. In his recent Federal Assembly Address, President Putin proposed giving university students the option of changing their major after their second year. In Rector Kuzminov’s view, HSE should pursue this kind of model.

Having reached record numbers in full-paying student admissions, the HSE campuses in Moscow and St. Petersburg will work to reduce Russian citizen admission and increase international student admission. There are several reasons for this. One of them, according to the rector, is that, per each full tuition-paying student, HSE has spent almost as much money as it has received. At the same time, Russia is expecting a demographic decline, which will need to be compensated. ‘We must attract bright students from other countries, and HSE University is ideally equipped for achieving this mission. We are the most selective university,’ said Yaroslav Kuzminov. ‘In our last admissions campaign, HSE received 10,000 applications from international applicants and accepted 2,000. By 2030, half of our foreign student body will be English-speaking.’

Yaroslav Kuzminov also noted the need to diversify learning formats at HSE by significantly increasing online course offerings and entering into more university partnerships. ‘What I hope to see by 2025 are CVs with lines saying “I graduated from such-and-such university, and took HSE University courses”,’ he said. The rector also spoke about expanding the university’s global profile. ‘We need to not just survive, but to sharply increase our visibility. We must be on the radar of international experts.’

We must also, said Rector Kuzminov, restructure the way in which research and scientific inquiry is organized at HSE. It is important to create centres that will not only produce but attract strong scholars. ‘This is our task,’ he said. ‘And a second task is to facilitate the development of research programmes that are specific to each programme in each department in every school. Without research, a programme is meaningless. A quarter of funds earned by a faculty should be allocated towards research and the faculty itself.’

Another important issue raised at the meeting of the Academic Council was the new university housing system, the changes of which will be introduced in 2021 (i.e., the changes will not affect current students or those matriculating in 2020). ‘We will continue to provide housing to those who need it and will develop a housing rental system. Many students do not wish to try renting an apartment on their own. Together with Dom.RF [an integrated housing development institution focused on national initiatives that aim to improve housing quality and affordability – ed.] and Vnesheconombank [a Russian state development corporation – ed.], we are in the process of developing student living campuses equipped with the necessary community infrastructure.’

Alexey Chukarin, Senior Director for Digital Transformation, presented a report regarding the HSE’s Digital Development Programme. ‘We actively strive to rely on internal resources, take a productive approach, and avoid solutions that are merely temporary fixes,’ he said. Mr. Chukarin also indicated that the University’s digital education programme will be implemented in phases. The first phase will focus on developing and procuring a full range of tools. ‘This will enable HSE, as an educational entity, to be considered a genuine leader in this sphere.’ In addition, two key platforms—educational and back-office —will be developed, in addition to the HSE.ru online system and its mobile applications, the pool of which will be developed in collaboration with students.

The rector, in turn, noted that students should be actively involved in HSE’s digitalization projects. ‘We are forming student teams to join us in the development our digital university—to collaborate on the creation of educational services, educational games, and simulators.’

Vice Rector Sergey Roshchin emphasized that the digital university project is not a technological project: ‘Our Development Programme is a digital university development programme,’ he said. By digitalizing education, HSE achieves many important tasks: it increases student performance; eliminates geographic borders by creating a universal online environment; increases access to education; and so on.