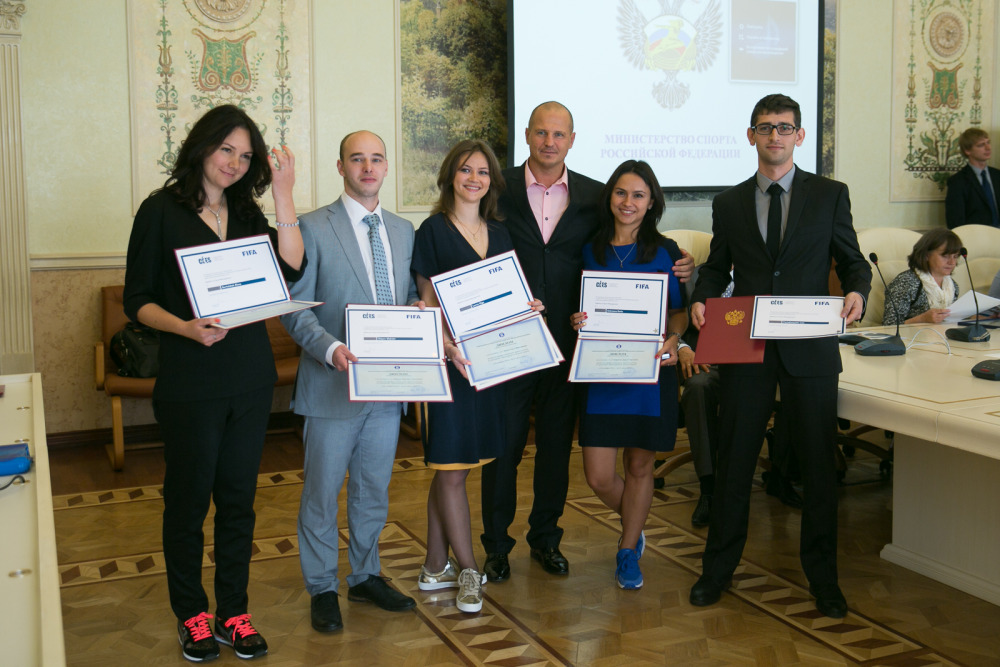 The HSE Sports Management graduates’ project for new style sports academies was named the best project of the international network FIFA/CIES in 2015 by a jury at FIFA’s headquarters in Zurich on January 14th.

The joint professional training programme in Sports Management was opened by HSE and CIES (International Centre for Sports Research, created by FIFA and Neuchatel University and Government) in 2014. HSE became one of 16 university partners in the FIFA CIES network and the only one in Russia. More than 30 students have now graduated from the course. Among them are Olga Laeva, Elena Bortnichek, Daria Smirnova, Lev Fertelmeister and Maxim Shipov. ‘Academy 360°’ was their final project. It is for a new model of sports education establishments where professionals can train fully and get a proper education at the same time.

For most sportsmen these days, school and university education become a poor imitation of the real thing. The legendary figure skating trainer Yelena Chaikovskaya talked about the dire consequences of this when the students defended their final projects at HSE, ‘Once their early sporting career is over,’ she said, ‘a huge number of remarkable but poorly educated people are simply cast aside and this is a major social issue’.

Ms Chaikovskaya, who has her own figure skating school, was a consultant for Academy 360° and Maxim Shipov is one of her pupils. The sports lawyer and former general director of the Lada hockey club Alexander Chebotaryov was the team’s coach.

After the project received high marks from the HSE qualifying commission, it was entered in the FIFA/CIES competition. The jury (representatives of FIFA and the academic community) examined 14 projects from different countries. Making their decision, the jury noted the ‘numerous strengths’ of the Russian project, in particular its ‘strong academic and theoretical basis.’ They also gave credit to the fact the project is already being put into practice in a sports academy in the Krasnodar region.

CIES General Secretary Vincent Schatzmann said the competition for the FIFA CIES  Network Prize ‘creates a healthy degree of competition between the partner universities in the network’. ‘We can see the students are more engaged and the quality of team projects improves every year’, he added. The prize winners can now come to Switzerland to visit FIFA the ‘home of football’, the CIES headquarters at Neuchatel and present their project to FIFA masters students.

The second enrollment for the joint Sports Management programme began in autumn 2015. The students (there are 29 of them) will take part-time courses for 8 months under the guidance of leading Russian and international sports managers, economists and lawyers, famous trainers and directors of sports organisations. They will defend their final projects in June 2016. Those with the best projects will have the opportunity to enter a global competition to present them to FIFA top managers.
Date
15 January  2016
Topics
Education
Keywords
alumniachievementssports management

Oleg Kononov, who graduated from the HSE FIFA / CIES programme in 2018 and previously headed Arsenal Tula, has been appointed head coach of FC Spartak Moscow.

‘I Know That More Than One Olympic Games Await Me’

Several HSE graduates worked at the Olympic Games, which recently came to a close in Rio. Elena Stenkina, Daria Smirnova, and Evgenia Dolina told the HSE news service how they came into the sports industry thanks to HSE, even though several years ago they couldn’t even imagine having anything to do with sports.