The Executive Programme in Sports Management is run by HSE together with FIFA/CIES and prepares sports leaders who are able to deal with the many complex problems that may arise in sports organizations today. The programme covers all sports disciplines, providing education in six key areas of sports management: organization of sports events; financial sports management; sports management; sports marketing and sponsorship; sports law; and sports communications. Every year, experts in the field are invited as leading lecturers, business instructors, and coaches in the programme. This year, they included such global stars of sports management as Ebru Koksal, Christine Morel, and Kalem Mauvois, as well as leaders of the organizing committee for the 2018 FIFA World Cup, and top executives from the Russian Ministry of Sport.

Dmitry Kuznetsov, Director of the HSE Higher School of Law, Leader of the HSE/FIFA/CIES Programme, emphasized the outstanding start by the HSE campus in St. Petersburg: the St. Petersburg team won the graduation project competition. In addition, Kuznetsov said that according to students’ feedback, the Sports Communications module, which took place in Pushkino near St. Petersburg, was the most memorable part of the course. In the next academic year, the first two modules of the programme will be run in Moscow, while the third and fourth modules will be available for students both in Moscow and St. Petersburg (a live broadcast will be organized in the two cities). The fifth module will take place in St. Petersburg, and the sixth one, on sports broadcast organization, will be held in the two cities simultaneously.

‘Graduates in the two cities were working together as one big family’, said Aigul Kadyrbaeva, co-head of the programme in St. Petersburg and Director of the HSE Institute of Continuous Professional Education, ‘Many St. Petersburg residents used this opportunity and came for classes in Moscow, while many people from Moscow attended our classes. We felt almost no distance between the cities, and many graduation projects are a result of joint work performed by students from Moscow and St. Petersburg together’.

Roland Chavillon, manager of FIFA/CIES, also congratulated the graduates on the occasion, noting HSE’s innovative approach to education through the example of the two campuses, and also advising the graduates never to lower their professional standards. 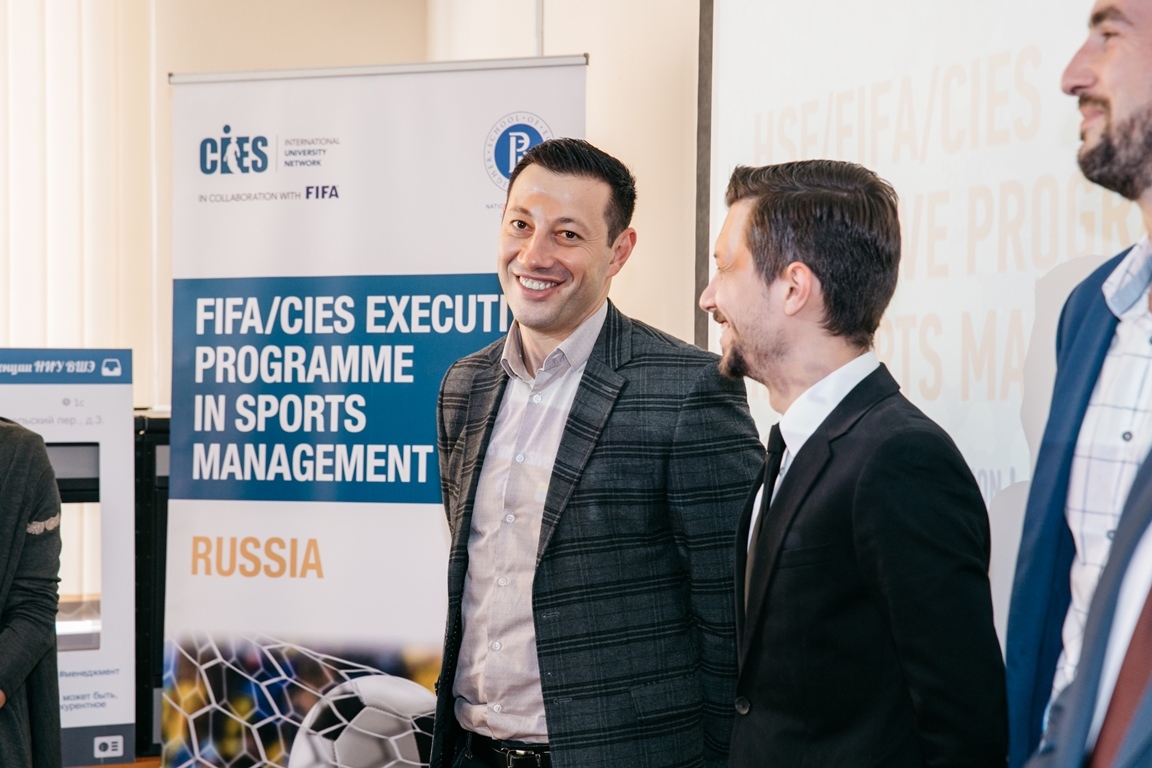 The graduates defended their projects before an international jury chaired by Pierre Lanfranchi, Scientific Coordinator of the International University Network CIES/FIFA and academic supervisor of the FIFA Master Programme. Andrey Vlasov, technical director of the Russian Football Union (RFU), was a member of the jury on behalf of the RFU. Roman Shirokov, sports leader of the HSE/FIFA/CIES programme in Moscow, and 2017 graduate of this programme, took his place on the jury for the first time this year.

This year’s best project was a socially important project suggested by the team from St. Petersburg, ‘Multi-functional sports and recreation complex as a foundation for preserving and developing the socio-cultural environment in small towns’. The project will represent Russia in the international FIFA/CIES project competition.

CEO and co-founder of Estadio Group, graduation project ‘Multi-functional sports and recreation complex as a foundation for preserving and developing the socio-cultural environment in small towns’

I came to this programme because my friends and colleagues had recommended it to me. First of all, I came to get knowledge and professional contacts, and everything I received exceeded my expectations. In our team project, we tried to address two important questions: what (currently available) tools can be used to build a sports and recreation centre in a small town, and how can they be made independent of state funding. According to the jury’s assessment, we successfully solved these problems. In the future, we are going to implement this project practically, and now it is at the preparation stage.

Second place was taken by a project dedicated to a new approach in designing regional football development programmes, and it has been highly rated by the professional community. Third place was shared by two projects: ‘Prospects for futsal development’ and ‘Smart social and charity system for the sports industry’.

My new knowledge in sports management, sports communications, law, and economics allowed me to look at my professional work from a more advanced perspective.
The graduation project on the creation of  the ‘Femida Sport’ Association was supported by Denis Verkhovsky, President of CSKA Beach Football Club, Sergey Markov, Sports Director of the Russian Rugby Federation, and Sergey Seyranov, President of the Russian Student Sports Union.

The project was supervised by Vera Kuznetsova, who accepted an invitation to become a sports leader at the HSE/FIFA/CIES programme in St. Petersburg, and aims to create a modern specialized sports and health cluster as an essential requirement for the balanced development of mass-participation sports and high performance sports. The project was rated highly not only by the international jury, but also by the Russian experts.

I’m happy that I not only had a chance to increase my professional level during this programme, but also to meet wonderful people. When I was applying for the programme, I was keen to learn more about how FIFA works, since organizing our work in the same way as they do is still ‘rocket science’ for us, but we are gradually approaching global standards. In our project, we are trying to revive sports boarding schools that existed in the Soviet Union, on new terms. We’ve developed a documentation package, which shows how to use equipment, funding, etc., more effectively.

Two teams presented similar models of economically efficient construction and operation of stadiums in general, and management of a new stadium built for a mega sports event, through the example of the Samara Arena.

It was interesting for me to compare the Russian approach to sports management with how it works in France, where I come from. During my studies, I’ve significantly improved my Russian and met many very interesting people. At first, it seemed that I would feel uncomfortable at a Russian-taught programme as a foreigner, but the atmosphere turned out to be very friendly, like a family.

According to Dmitry Kuznetsov, HSE contributed a lot to preparing for the 2018 FIFA World Cup in Russia. Many people who had graduated from the programme in previous years worked in the national team management, in the World Cup Organizing Committee, and in the Organizing Committees of the hosting cities. Among the graduates whose performance at the event was outstanding, he mentioned Evgeny Savin, manager of the national football team (awarded by an Honorary Certificate from the Russian President as a result of the World Cup), Victoria Lopyreva, World Cup Ambassador and 2018 graduate of the programme, Mikhail Mossakovsky, a leading football commentator and reporter, and Nikolay Kondakov, one of the country’s best sports photographers.

In addition, as part of the CIES Championship, the alumni association of FIFA Master programme and HSE, with the support of the football union, organized the first international conference ‘Sports and the Future’, which attracted football leaders from 20 countries, as well as FIFA President Gianni Infantino, who was extremely impressed with the level of the Championship, its infrastructure and atmosphere.

As is traditional, at the end of the graduation ceremony the progamme’s best teachers were recognised. This year, they were Sergey Altukhov, Anastasia Shalimova, and Nayil Izmailov. 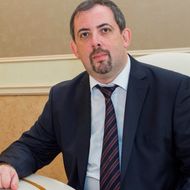 ‘How to Teach New Generations of Students?’

The final lecture in the course ‘Teach4HSE: Seven Key Principles of Teaching Excellence’ was delivered by Prof. Vadim Radaev, First Vice Rector of HSE University. His talk about modern problems in teaching and their potential solutions was available to anyone interested. This open talk was held online via YouTube and Zoom, with over 400 teachers from different HSE campuses, as well as representatives of other universities, attending the event.

The HSE Graduate School of Business and Rosgeo, Russia’s largest geological exploration holding, have launched a programme in strategic planning and reorganization management, targeted at management teams of a Rosgeo subsidiary.

A new Master of Public Administration (MPA) programme has been developed by the Moscow School of Administration Skolkovo, HSE University, Strelka Institute, and the New Economic School, at the initiative of VEB.RF. The programme will teach a total of 500 participants, with the aim of developing administrative staff for 100 Russia’s biggest cities.

Oleg Kononov, who graduated from the HSE FIFA / CIES programme in 2018 and previously headed Arsenal Tula, has been appointed head coach of FC Spartak Moscow.

On September 22nd, 2017, graduates of the HSE/FIFA/CIES programme in sports management received their degrees. This was the third year of graduates from the programme. Thirty students of the programme studied six modules: sports management, law, marketing and sponsorship, financial management, management of sports venues and competitions, and communications. Over 70 people spoke during the courses, including Andreas Herren, former Director of Communications at FIFA, Jean-Luc Gripond, President of SportVision, a French consulting agency, Pavel Kidisyuk, Vice President of Avangard hockey club, and Mikhail Demin, CEO at NTV Plus.