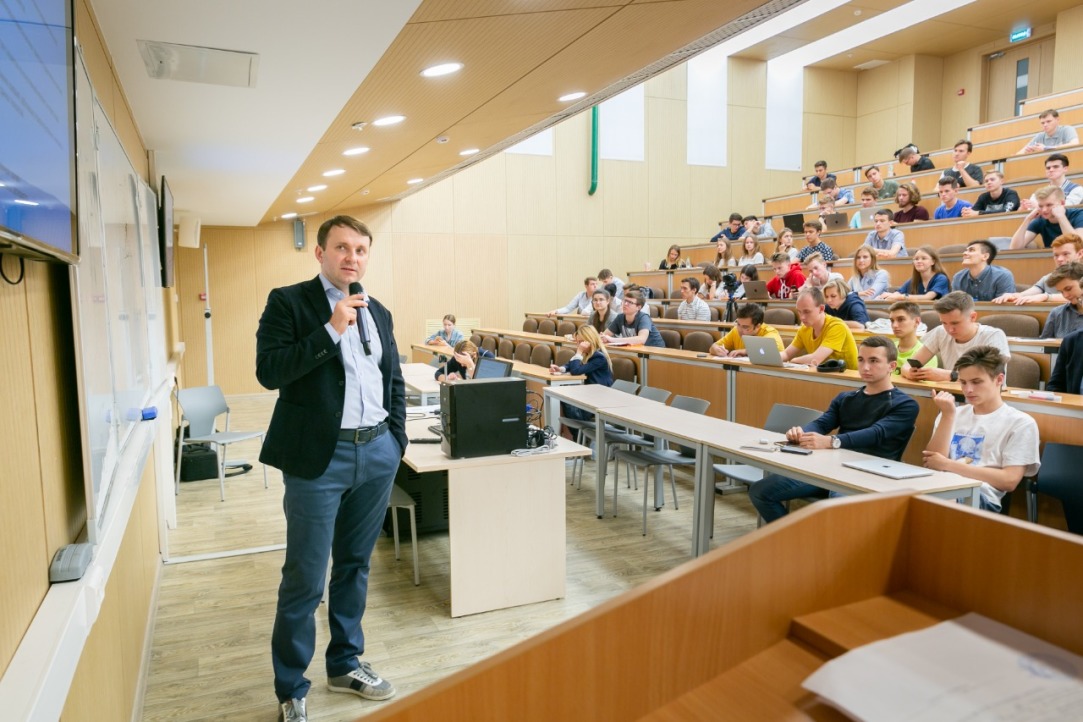 The Minister began his lecture, which was held at the new complex on Pokrovsky Boulevard, with memories of his time at HSE. He recalled how this period of his life coincided with a dark period in the Russian history: the economic crisis of 1998.

Two weeks after the crisis of August 17, 1998, I entered university. I remember the gloomy atmosphere: everyone was down

According to the minister, when he started his studies, inflation in the country was reaching 100%: ‘And many other bad things were happening in the economy. But this period gave way to explosive growth.’

The changes in the economy over the last 25 years were the key themes in the minister’s talk. He went into detail about how the economic growth of the early 2000s was followed by the 2008 crisis. Then, a minor growth spurt was broken in 2014 by falling oil prices and sanctions. ‘Recovery began at the end of 2016,’ Maxim Oreshkin explained. ‘We grew by 2% in 2017 and again in 2018. This year, growth rates have slowed down. The global economy is growing faster: in 2018 it grew by 3.5%, and in 2019 it will have grown by about 3%. We are growing slower than the world, and this is not good.’

The Head of the Ministry of Economic Development explained what factors impact economic growth and aggregate demand. He also discussed the banking crisis that occurred several years ago and spoke about the key areas of the ministry’s activities in the coming years.

The most debated reform today is the ‘regulatory guillotine’. This is our attempt to reform the system of oversight and regulations and remove excessive requirements [placed on businesses]

The minister also noted the need to improve Russia’s job market. He stressed the importance of working with regions where levels of unemployment are higher than the national average. (For example, in Tyva the unemployment rate is about 11%.) In addition, he noted that Russia needs to increase the digitalisation of its economy and encourage the inflow of highly skilled migrants.

The Ministry is also working to widen the application of artificial intelligence in all fields, as well as to help the economy transition from oil to environmentally-safe energy sources.

Students thanked the Minister for the lecture and eagerly engaged him in a lively Q and A session. What will stimulate Russian economic growth? How does the Ministry support small and medium-sized businesses? What political measures will be taken for complete inviolability of private property? How can trust in law enforcement bodies be increased? Students were interested in all sorts of aspects of economic and political life. Maxim Oreshkin was also asked what the most useful thing he learned at HSE University was. ‘The main thing I learned at HSE University is the ability to study and surround myself with people who are pleasant to work with, who help you,’ he answered.

In an interview with RBC, Yaroslav Kuzminov, Rector of the Higher School of Economics, speaks about the problems facing Russia’s economy, the Strategy 2020, the status of higher education and about the areas worth developing.

Economic perspective on culture and diversity

On October 18-19, 2013 the conference 'Culture, Diversity, and Development' will be held in Moscow. Leonid Polishchuk, Professor, Head of the Laboratory for Applied Studies of Institutions and Social Capital at the HSE, shared his vision of the issue and introduced some participants of the conference to the HSE news service.