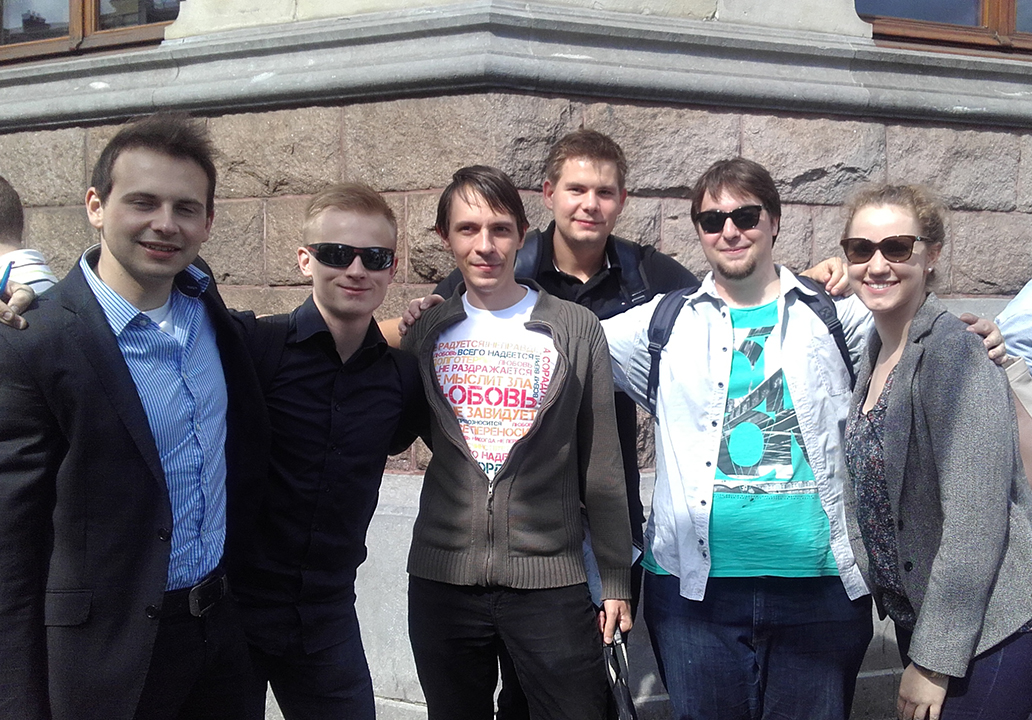 Forum participants. Dmitry Shostko is pictured in the white T-shirt.

IBM held its annual forum, the Best Student Recognition Event, in Amsterdam on July 8-10, 2015. The IBM Corporation has been carrying out the event since 2008, bringing together some of the best students in Europe. Around 70 students attended this year’s event, including HSE student Dmitry Shostko, who studies Business Informatics in the Big Data Systems Master’s Programme. Dmitry was rated one of the top-10 students for the second semester.

The main topic of this year’s forum concerned food waste, with a special discussion being called ‘Smarter Food: Don’t Waste It, Taste It.’ Students were asked to think about what can be done in this field and how modern ‘smart’ technologies might be applied to raise the efficiency of food production. During a discussion of this global issue, forum participants talked about narrower issues about which special papers were presented: ‘The Impact of Agriculture on Our Planet,’ ‘Food Waste: Origin, Problems, and Solutions,’ and ‘Big Data in the Context of Social Problems of the Big City.’

The event spanned over the course of three days. On the first day, participants were told about IBM – how its internal policy is structured, what IBM invests in, and in which direction the company is developing. The topic of Research & Innovation at IBM was also touched upon. These issues were discussed by managers from certain IBM divisions in Europe.

The second and third day were devoted to a business case on Food Waste, which students solved on a team. The main problem was stated as such: organic substances always tend to deteriorate. If this is unavoidable, then it’s possible to lower the amount of food that is lost. This is precisely what forum participants worked on – looking for ways to resolve this problem. Students had to come up with an idea, justify ways of monetizing it, think of the amount of investments needed, etc. In other words, participants had to create a startup and attract IBM as an investor.

Students were then asked to present their work. They attempted to ‘sell’ their idea to a jury consisting of IBM employees.

In order to give students the opportunity to relax a little from this important issue, a Treasure Hunt was organized to get to know the city.

‘I ended up at the IBM Best Student Recognition Event thanks to the Big Data Systems Master’s Programme I’m in,’ Dmitry Shostko says. ‘The programme prepares highly skilled managers with an understanding of the details of the Big Data technology stack. One can’t manage processes, people, and technologies without understanding their essence. The programme teaches exactly this, preparing specialists with the professional skills of both a data analyst and a project manager. The big data sphere is not the future anymore, it’s the present. Big data departments are now being created within all large corporations. This includes finance corporations, the telecommunications sector, retail, and IT companies. Whereas four years ago, Big Data was the most discussed topic at conferences, this isn’t the case anymore. And the reason is very simple – people have started acting and moving from discussion to practice. So it’s really great that there’s a place where you can learn about this field from highly qualified individuals,’ he notes.

‘Completing My Studies in Russia Has Always Been My Dream’

Ismail Kayali, from Aleppo, Syria, earned his MS in Big Data Systems from the HSE Faculty of Business and Management in 2018. He is currently pursuing a PhD in Informatics and Computer Engineering at the HSE School of Data Analysis and Artificial Intelligence.

‘My Time at HSE Will Always Be Special for Me’

Sangam Kumar Singh is currently finishing the second year of his Master of Science in Big Data Systems. After spending the first year at HSE Moscow, he has gone to the UK on a double degree track with Lancaster University. Sangam has talked to HSE News Service about his studies, hobbies, research interests, and future plans.

‘Business Informatics Gives You Great Freedom in Your Career Choices’

Maria Fay earned her bachelor’s and master’s degrees in Business Informatics from HSE University (2013). Today, she works at SAP and is in charge of innovation projects in Central and Eastern Europe. She recently earned her PhD from the University of Liechtenstein. Maria has talked with the HSE News Service about combining education, work, and research.

Social Media as a Lens on Collective Emotion

During the XX April International Academic Conference on Economic and Social Development, scheduled this year for April 9-12 at the Higher School of Economics, Dr David Garcia of the Complexity Science Hub Vienna and the Medical University of Vienna, Austria will present a report entitled ‘The digital traces of collective emotion’ at a session on ‘The Wellbeing of Children and Youth in the Digital Age.’ Ahead of the conference, Dr Garcia spoke with the HSE News Service about his conference presentation, his research, and plans for ongoing collaboration with HSE colleagues.

‘Big Data Systems Programme Is the Perfect Amalgam of Business, Analytics, and Informatics’

Sangam Kumar Singh has come from India to do a Master’s in Big Data Systems at the HSE School of Business Informatics in Moscow. He has chosen HSE due to its high standing in global university rankings such as QS and the Times Higher Education ranking as well as its focus on research and innovation. Having started his career in engineering within telecommunication business and later moving onto R&D application and analytics in the same area, he was drawn to HSE’s programme because it combines business, informatics and analytics and equips its graduates with the skills and knowledge required by our modern economy and ever-changing market dynamics.

On June 29, the third graduation ceremony for the double-degree Master’s programme in Big Data Systems (HSE, Russia) and Information Systems Management (UAS Technikum Wien, Austria) was hosted at the Austrian Ambassador’s Residence in Moscow. Dr. Hartmut Koller-Lenhardt, Chancellor at the Embassy of Austria in Moscow, gave the opening address. He congratulated the graduates on their successful completion of the programme and stressed the importance of cooperation between the universities in regards to cultural and professional communication and connections.

Fedor Ratnikov, a leading researcher at the Laboratory of Methods for Big Data Analysis (LAMBDA), has been appointed project coordinator in the SHiP collaboration. He will be responsible for developing and designing the detector’s active magnetic radiation shielding.