‘The Main Thing You Learn at ICEF is How to Think’

The 16th graduation ceremony for ICEF students of HSE and the London School of Economics has taken place at the residence of the British Ambassador to Russia. This year’s ceremony had a record number of graduates, with nearly 190 bachelor’s and master’s students receiving their diplomas.

There were a number of speakers at the event who congratulated the new alumni on all their hard work: HSE President Alexander Shokhin; HSE First Vice Rector Vadim Radaev; ICEF Director Sergey Yakovlev; UK Ambassador to the Russian Federation Mr. Laurie Bristow; University of London Pro Vice-Chancellor Dr. Mary Stiasny; ICEF Project Director at LSE Richard Jackman; Deputy President and Chairman of the Board of VTB24 Mikhail Kozhokin; and honorary guest Professor Christopher Pissarides, who is a Nobel Prize winner, a London School of Economics Regius Professor of Economics, and Associate at the Centre for Economic Performance. Professor Pissarides also gave a public lecture at ICEF.

The 2016 ICEF graduating class was not only the biggest, but also the strongest. For the first time ever, the number of students graduating with honours reached 49, up from the previous record of 29. In other words, a third of the undergraduate graduating class received honours diplomas this year. In addition, there were two new majors represented in this year’s undergraduate graduating class, the first being the Mathematics and Economics specialization, while the second was the Accounting and Finance major. ‘The Mathematics and Economics major was spearheaded by students themselves four years ago,’ notes ICEF Director Sergey Yakovlev. ‘It’s very popular among students, and nearly 70% of this year’s Mathematics and Economics graduates received honours diplomas. This speaks to both the academic strength of the students themselves, as well as to the traditional mathematical education offered here in Russia.’ 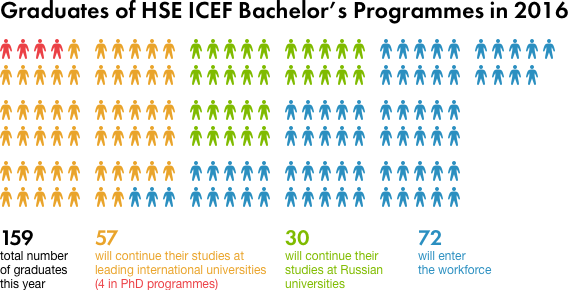 A large number of graduating undergrads typically continue their education, with many entering into graduate programmes at top universities abroad. This year, 57 graduates are going abroad to get their master’s or PhD, and 70% of them were accepted to universities from the QS Top 50 list. The graduates who decided to enter the workforce – half of overall graduates – have already secured positions at top Russian and international companies.

Most graduates of an ICEF master’s programme are focused on starting their careers after the university. This year, however, there were four graduates of varying ages who decided to enter into PhD programmes in economics, finance, and management at American universities such as the University of Pennsylvania, the Wharton School of Business, Duke University, and the University of California.

As for the types of jobs ICEF graduates found, six graduates received offers from top international companies such as McKinsey, BCG, ATKearney, and Oliver Wyman. In addition, 11 graduates are currently working in London, and seven of them received offers to work in the City of London immediately after finishing their programmes in Moscow.

Sergey Yakovlev noted an interesting correlation – during the 2008-2009 crisis, the percentage of ICEF graduates studying abroad fell, but then rose again once the economy improved. The same thing happened in 2014 and 2015, as now we are seeing an increase in the number of students who study abroad. Perhaps this is a new metric for looking at economic recovery in Russia, Yakovlev comments.

Who Will Have Lunch with the Prime Minister?

The ICEF graduation ceremony is traditionally held at the residence of the British Ambassador to Russia. In his speech to 2016 graduates, Laurie Bristow noted that there was a certain symbolism behind this fact. In 1944-1945, Bristow reminded graduates, several lunch meetings took place between Churchill and Stalin in the room neighboring the hall in which the ceremony took place, ‘defining the contours of the future structure of the world.’ This is also where Queen Elizabeth II was during the British ruler’s first state visit to Russia. ‘One of the things I try to do in this house is establish a connection between the past, present, and future,’ Bristow comments. ‘And looking around here, I can say that the future is you. You are the next generation of leaders and decision-makers in Russia. But you are also people who now know quite a bit about Great Britain, our values, and how we feel towards Russia.’

HSE President Alexander Shokhin also spoke to graduates at the ceremony: ‘Maybe not all of you are counting on having lunch with the British prime minister in this residence, but there are a lot of other interesting events ahead of you.’ Shokhin asked graduates not to just sit back and relax now, but to continue learning and gaining further qualifications. ‘As the heroine in Lewis Carroll’s story says, you have to run as fast as you can just to stay in place.’

University of London Pro Vice-Chancellor Dr. Mary Stiasny added that the University of London is very proud of the ICEF graduates – individuals who, every year, prove the effectiveness of the partnership between the British and Russian universities. In addition, Nobel laureate Christopher Pissarides recommended that the ICEF graduates do some ‘job shopping.’ In other words, they shouldn’t be afraid of finding themselves at different companies, universities, or entire fields. This type of search will help them better understand themselves and find the thing that is most fulfilling and helpful both for them and the people around them.

Professor Pissarides’ strategy is being put to use by 2016 ICEF graduate Dmitry Arustamov, who wants to try his hand in various fields of finance before sticking with one particular specialization. ‘I wanted to work in economics and finance when school was over,’ he said. ‘I looked at which universities employers were partial to, and HSE stood out right away. I did still have to make a decision on which faculty to go into, but I was attracted to ICEF because of the English language classes. I definitely made the right decision. ICEF offers you a lot of opportunities that you couldn’t find many other places in Russia. Just look at how many ICEF graduates get into top Western universities after,’ Dmitry concluded.

Natella Geivandova, for example, went into HSE’s master’s programme in financial analysis after finishing her undergrad at ICEF. She was first drawn to ICEF four years ago when she learned that she would receive both a British and a Russian diploma. In addition, the education that HSE itself provides is ‘considered among the best in Russia,’ Natella adds. ‘We were the first ones to test this out after it opened.’

ICEF graduate Sofia Kortunova also talked about her decision to go to HSE: ‘At the time, I was preparing to go to a completely different university, and I was more interested in management. But my math tutor recommended HSE, noting that it was a great school with very high academic standards. The last four years were really challenging for me, but it was all worth it. The main thing ICEF teaches you is not actually economics related. The main thing you learn at ICEF is how to think, and there are only a handful of universities in Russia that do that. So I’m very thankful to all of my teachers and to the chain of events that ultimately brought me here.’

'It's Exciting to Study in a Rapidly Changing World'

Recognized card game masters claim that victory is possible only after making a thorough analysis of the likely combinations contained in your opponent’s cards, making it a literal application of data analytics to game theory. Anastasia Erastova, now a data scientist at the New York office of BNP Paribas, graduated from ICEF with honours. At the time, she was also the Russian vice-champion at bridge. In an interview with Success Builder, she explained why mathematics and gambling often go hand in hand, the advantages of studying next door to Wall Street and how math students can get a work visa in the United States.

At a recent webinar of the Master’s programme ‘Financial Economics’, held at ICEF (International College of Economics and Finance), presenters explained why the programme is unique and what sort of career prospects are open to alumni. Graduates of the programme, working at major global companies, shared their personal experiences, spoke about the key benefits of training and gave valuable advice to those preparing to work in international companies.

'After ICEF, It’s Easy to Enter a Western University because You’ve Already Studied in an International Environment'

Dmitry Storcheus set out to become an economist, but then shifted gears abruptly and went into mathematics. With a Master’s degree from the Courant Institute of Mathematical Sciences of New York University, he now works as a software engineer for Google and continues to conduct research with his academic supervisor and work on his PhD thesis. Here, he tells Success Builder why ICEF Mathematics graduates are head and shoulders above their U.S. competitors, why Facebook and Google are opening departments at universities, what ‘self-learning neural networks’ are and whether they threaten to unleash a real-life ‘Terminator’ against humanity.

Graduates of HSE University’s International College of Economics and Finance (ICEF) traditionally receive their degrees against a backdrop of grand fireplaces, an oak staircase, and a balcony overlooking the Kremlin. This is because the ICEF holds its commencement ceremony at the British ambassador’s residence on the Sofiyskaya Embankment. And this is not by accident. Graduates of the ICEF’s bachelor’s programme receive two degrees from HSE and the University of London, respectively, while graduates of the ICEF’s Master’s Programme in ‘Financial Economics’ receive a degree from HSE and the London School of Economics. This year marked the ICEF’s 19th commencement ceremony.

The Second ICEF Conference in Applied Economics will be held at HSE University on September 14. The HSE News service spoke with organizers and participants about the upcoming full-day event, which features eight papers presented by renowned specialists from Russia and across Europe and concludes with an evening dinner.