Developers participating in the event had to choose one of the industry challenges provided by the partner companies and come up with a creative solution. For example, over the three-day contest participants created an app or improved the efficiency of an existing online service for companies such as 1C, MTS, Ed Crunch and others.

The jury assessed the quality of project demo versions, project scalability, originality and compliance with the task. A team could participate in only one track from the companies and in any categories from the contest organizers, which included HSE; MIPT; RussianHackers, Russia’s largest hackathon community; and the Major League Hacking International Hackathon League.

The team of HSE and MSU students Alexander Borzunov, Arthur Liss, Ivan Grachev, and Nikolay Kruglikov won the contest. The students took part in a track offered by HERE, an international developer of geolocation services. The team created an application using the company's geodata and geoservices. 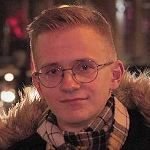 We worked on the app, which searches cafes and restaurants. Our algorithm first determines users’ tastes and preferences, analysing the available data from the cafes that they had already visited and their search queries. Then the app recommends one (and only one) cafe for a user to visit. This saves users from choice paralysis, which happens when a person sees dozens of nearby places in GoogleMaps/Yandex.Maps/Foursquare and puts considerable effort into analysing all the information.

For three of us it was the first serious hackathon. We used to participate in other programming competitions and decided to try a new format. We managed to come up with a cool idea and quickly created a prototype that the jury liked. The organizers asked us and several other teams to present our projects to the audience. After our presentation, Mike Swift (CEO and Co-Founder of Major League Hacking) shook our hands and said it was cool.

One of the differences between hackathons and other types of competitions is the distinct educational component. Lectures and workshops on relevant IT industry issues are traditionally organized for participants. This type of event also aims to foster a professional community and give participants the opportunity to network.

‘The hackathon is a great place for participants to meet people who will help them build their own business in the future,’ says Mike Swift, who visited Hack.Moscow v3.0 for the first time this year. ‘They may not succeed in creating a ready-made project at the hackathon, but they can come up with an idea and find a team to implement it. Hackathons encourage creative people and help them unite; this is a big advantage.’

Hack.Moscow v3.0 is the only Russian event that is part of the Major League Hacking International Hackathon League. The event was created and organized by HSE master’s students Alexey Frolov, Alexander Prosolkin, and Maxim Dyakov, as well as MIPT graduate Alexander Malyshev - the founders of RussianHackers; HSE student Maria Andreeva also joined the team. Over the past three years, the event has grown significantly in size and scope: the first hackathon was attended by 200 students and lasted only 12 hours.