Marx Was Right, but Not Completely

On October 10th, 2012, Professor Ronald Inglehart, Academic Supervisor of the Laboratory for Comparative Social Research, spoke at the Open Seminar meeting at the HSE Saint Petersburg Faculty of Sociology. In his lecture he spoke about why Karl Marx’s forecasts will never come true and how culture alters the modernization process.

Ronald Inglehart started his presentation with a story about Karl Marx, the German philosopher. Marx had a simple but overarching theory which described global historical processes from the perspective of productive forces and industrial relations. According to Marx, the determinative variable of the structure of relations, as well as everything else, is the economy and all the things that are related to it. Many people have written many things about how the author of ‘Das Kapital’ was wrong, but his concepts were quite logical for his time. He looked at events which were taking place around him, projected them into the future, and as a result, concluded that over time more and more people would become part of the proletariat, industrial workers who have to live in hard circumstances, in virtual poverty. Inevitable contradictions between their massed labour and private capital will inevitably lead to revolution. However, in most countries this forecast did not come to pass, and those countries which chose the communist path have already renounced it. China, in fact, is not a capitalist country, and inequality there is even wider than in the United States of America. The Juche system has survived only in North Korea, but no one envies this country or wants to follow its example.

Can we state definitively that Marx was wrong? No, the economy really is the basis for social change, but the founder of the communist movement did not and could not take everything into account. First, the historical process is a non-linear one. Marx based his forecasts on the basis of linear projections of all the events and relationships he saw around himself. But in reality, at some stage of modernization some previously unseen mechanisms started acting, which changed both the characteristics and the process of modernization itself.

Second, Marx did not take into account the path-dependency effect – this term means the behavior of a system whereby some events at the beginning of its development determine its further development and the final condition. An example of such dependency is culture, which plays an important mediating role in modernization, according to Inglehart’s theory. With the mediation of some cultures, modernization comes earlier and goes faster, and with other cultures it goes somewhat slower, but nevertheless, all cultures sooner or later undergo certain changes as the economy develops. 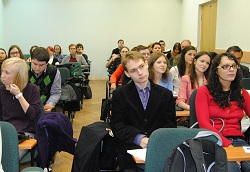 Ronald Inglehart classifies people according to their values, into materialists and postmaterialists. Materialists are people who have traditional social values, where their survival is not guaranteed. Suspicion, greed and closeness is not so much a recipe for success for them, as a recipe for physical survival. A lack of existential security also promotes such social phenomena as xenophobia, distrust of aliens, etc. During the industrial period, the role of ethnic nationalism grows.

Post-materialists have no doubts about their chance of surviving, since it is guaranteed and provided by economic development. They are confident in private security and this allows them to be more open, trusting, and happy. The emerging critical mass of such people has launched a new phase of modernization. Marx could not have predicted the post-modernist stage of modernization: replacement of heavy industry with the knowledge economy, and the emergence of politically active people who are able to unite with people of other race, nationality, religion, and class. Their lifestyle is not compatible with authoritarian regimes, they are not afraid to protest and express their civil position. As a result, regimes are forced to change and become more democratic.

Ronald Inglehart unveiled some empirical data as proof for this theory. His first large study of six developed West-European states in 1970 showed that in each subsequent statistical cohort, the share of post-materialists is higher than in the previous one. He faced criticism that this is probably not a characteristic feature of new cohorts, but a feature of a certain life cycle: when these people reach a certain age, they also will be cautious and suspicious. The Professor continued his study, but in a broader range of countries with repeated sessions, and the trend proved itself to be true: with each new measurement the share of post-modernists grows – the world is moving towards post-modernism.

After the speech a discussion took place, and a question about religion was asked. In the 1960s people believed that religion would lose its power, but it has kept, and even increased, its influence. Professor Inglehart believes this is related to changes in the global population structure: the share of people from poor countries has increased, where the economies are weak and traditional values are strong. In developed countries, secularization is continuing apace. Then why is the US so religious? Partly this is due to the effects of immigration. In Europe, immigrants are more religious than natives, and this is also true in the US as well – most church members are of Latin American origin. Another reason is the specifics of US development: this country was based on the principles of free enterprise and freedom of conscience. With a lack of central power, the social life of cities and towns was built around local churches. But this situation is also starting to change. Religion is losing ground among wealthy and educated Americans. And this is also connected with personal security: the lower the risk for personal existence, the less a person needs God.

An important difference between Europe and America is that the Old World is more socialized. In Europe each citizen has guaranteed material and medical aid, while in the USA, medical insurance is a private matter: the level of security is lower and more hope is placed in God.

The Faculty of Sociology at HSE Saint Petersburg carries out intensive research: several research laboratories and teams successfully conduct sociological studies in various spheres of life. The ‘Open Seminar’ introduced by Zhanna Kormina, Associate Professor and Head of Department for Human Sciences, is aimed at creating a common academic ground for sociologists, students and academics, to unite everyone interested in a deeper understanding of processes which take place in societies and among humans.

Psychology and the Social Effect of Alcohol Consumption: The Latest ‘Sociology of Markets’ Seminar Held at HSE University

Experts from the Laboratory for Labour Market Studies presented a report entitled ‘The Impact of Non-Cognitive Characteristics on Alcohol Consumption’ at HSE University. They talked about how different character traits affect the degree of dependence on alcohol.

Although Russia has traditionally been a patriarchal society, misandry—the sharp criticism of men, or ‘reverse sexism’—is on the rise. Women accuse men of every possible sin, from acting aggressively to being too passive at work and home, and from narcissism to general indifference. In a pilot study, HSE University researchers studied misandry in the women of two different generations.

A Tindergarten of Love: Barriers to ‘Digital Romance’ and Strategies of Online Dating App Users

The Russian Academy of Science’s Institute of Sociology recently published a collective monograph on socio-technical barriers to the production, distribution and consumption of digital technologies entitled Adventures in Technology: Barriers to Digitalization in Russia. A number of chapters were written by HSE University researchers Konstantin Glazkov, Olga Logunova and Alisa Maximova.

Beginning in May 2020, after the police killing of George Floyd, ‘Black Lives Matter’ demonstrations and riots engulfed the United States, the United Kingdom, and several European countries. Though Mr. Floyd’s killing served as the immediate catalyst for the unrest, many scholars suggest that the COVID-19 pandemic and the resulting economic crisis played a deeper, more pivotal role in creating conditions that led to the protests.