On May 17th a presentation of the book ‘Russian Tide’ by John Pepper, former director of Procter & Gamble, took place at the HSE.

The participants of the presentation included John Pepper himself, who worked for Procter & Gamble (P&G) for about 40 years, and until recently served as Chairman of the Board at the Walt Disney Company, and his former colleagues from the Russian office of P&G, Andrew Somers, President of the American Chamber of Commerce in Russia, and Evgeniy Yasin, HSE Academic Supervisor, who worked at the Russian Union of Industrialists and Entrepreneurs and held the position of Minister of Economy during the years when P&G started its operations in Russia.

The decision to come to Russia was not an easy one for Procter & Gamble, John Pepper admitted. ‘People discouraged us from doing this, they advised us to go to Czechoslovakia, Poland, or Hungary’, he said, ‘But we did not listen to that advice’. The company’s first partner in Russia was the Saint Petersburg State University, with the support from Anatoly Sobchak. And in 1993 the company acquired its first production factory in Russia – a factory in Novomoskovsk, Tula region. Initial investment was only $15 million – today this sum sounds ridiculously low, John Pepper said, but during the years of economic uncertainty this was a substantial investment for Russian industry.

The new production did not immediately start bringing profits, but P&G was ready for that. ‘We knew nothing about Russia, and it was very important that we met people here who supported our project, like, for example, Anatoly Sobchak and Evgeniy Yasin, who told us “Come and work”’, Mr. Pepper explained, ‘It was important for us to hear this from such respected people in Russia’.

John Pepper defined five criteria which determined P&G’s success in Russia. The first of them is strategic vision. ‘From the very first day we set ourselves the goal of being the best consumer goods manufacturer in Russia’, Mr. Pepper said. ‘The best not only in terms of the quality of the goods, but in terms of working conditions for our employees and cooperation guarantees for our partners’.

The second criterion is the right choice of specific marketing strategies. ‘I think our company was the first to carry out a real marketing study among Russian consumers’, John Pepper said. In addition to that, it was essential not only to establish manufacturing in Russia, at the Novomoskovsk factory, but to get local suppliers of raw materials. As a result, the goods are produced on Russian territory, mainly from Russian raw materials, which decreases the costs and allows us to sell the products at prices which are affordable for Russian consumers.

Success is also supported with well-thought out distribution network, which is organized along the Trans-Siberian railroad with branches covering most Russian regions. ‘Today, such a logistical solution seems natural, but it was not that obvious in the early 90s’, John Pepper said.

The fourth, and ‘probably the main’ criterion is orientation to local staff during the establishment and development of the Russian operations. According to Mr. Pepper, P&G has an effective system of staff recruitment, which allows them to select and hire the best students and graduates of Russian universities. Engineers and technologists in the company are also mainly Russians: their qualifications are equivalent to that of their German colleagues, whom the P&G management initially planned to attract as supervisors. 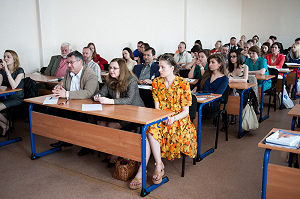 Finally, one more component of success is values. ‘We trust in people and care about them’, John Pepper emphasized. Acquisition and modernization of the Novomoskovsk factory demanded tough staff decisions related to the cuts among unqualified personnel. But the people cannot be thrown out on to the street. They were able to get professional retraining and enter new workplaces, and some of them even received support from the company and started their own businesses.

During the Q&A session, John Pepper spoke about two more aspects of P&G’s operations in Russia. He called the Novomoskovsk factory the company’s best factory in terms of industry safety – both for employees and the environment. Also, the company seeks to be tidy and clean in terms of its relations with partners and governmental officials. ‘I cannot say how many times someone has tried to ‘approach’ us, but we have strict principles as regards to bribery’, the former head of P&G said, ‘If we find out about corruption, the employees involved are fired immediately’.

John Pepper continued this theme, which os very relevant for the Russian economy and society: ‘American entrepreneurs, usually, from medium-sized business, often tell me that they would not invest in Russia because of the corruption flourishing here. I am very worried about this, but I really hope that the situation will change’.

Andrew Somers was asked a question about the impact that Russian accession to the World Trade Organization (WTO) will have on Russian-American trade relations. Mr. Somers believes that in the long-term, the effect of Russia’s entrance to the WTO will be positive. Both Russian exporters and consumers, who after the decrease of import duties will be able to buy more goods at better prices, will benefit from it. And Evgeniy Yasin emphasized another positive aspect: Russian companies (particularly, metallurgical) which enter the US market will have legal grounds to dispute the protectionist measures sometimes taken by the US government to protect their manufacturers from external competition in the appropriate WTO commission.

‘As I listened to Mr. Pepper, I imagined the picture of the processes which were taking place in Russia in 1991 and 1992’, Evgeniy Yasin said summarizing the meeting, ‘It was, on one hand, a nightmare, and on the other hand – a time of extremely important changes which proved decisive for Russia. Not everyone was lucky enough to establish cooperation with a powerful American corporation. Novomoskovsk was once called Stalinogorsk, and the local factory was facing tough times. Thanks to Procter & Gamble the situation there improved, and it has become one of the leading enterprises in Russia. Would our American partners today decide to invest in such an enterprise? I am not sure. But Procter & Gamble has travelled this route together with us. And we can say ‘thank you’ to John Pepper not only for his book, but for everything he and his employees have done and are still doing for the Russian economy’.

‘We Want the Students to Experience Real Project Work’

Contemporary universities are becoming not only centres for education and research, but also hubs for entrepreneurship. Igor Agamirzian, HSE Vice President, Head of the Department for Management of Innovation, spoke about the development of the HSE’s innovation infrastructure, about attracting students to technological business projects, and about the master’s programme ‘Corporate Research, Development and Innovation Management’.

Artem Kritsyn, Manager of regional programmes and projects at the HSE Business Incubator, now heads the Working Group to Involve Secondary and Higher School Students in Entrepreneurship. The Working Group was created in October 2017 by the Expert Council on the Development of Civil Education and Student Socialization under the State Duma Committee for Education and Science. The Working Group also includes Tatyana Stroganova, Head of the HSE Innovation and Enterprise Office.

The HSE Centre of Entrepreneurship in Nizhny Novgorod has started working in close cooperation with the Russian Academy of Sciences Institute of Applied Physics (IAP) for the purpose of commercializing the latter’s research results. The Centre will help IAP’s scholars market their projects.

How Geek Can Become Entrepreneur: Advice from Uber Founder

Travis Kalanick, founder and CEO of Uber, met some HSE students and told them what qualities a successful entrepreneur should have and why there is space for magic in business.

Entrepreneurship is About More than Just Money

On September 14 2015, Dr Alina Sorgner will give a talk at the annual meeting of the HSE Laboratory for Entrepreneurial Research on 'Does Entrepreneurship Pay? Empirical Analysis of Incomes of Self-employed, as Compared to Wages of Paid Employees'. Ahead of her visit to HSE Moscow, the young academic gave an interview to HSE English News  Service about variations in entrepreneurship in post-communist countries and about her cooperation with HSE.

The Future of Business Depends on Developing Countries

The 6th International Summer School ‘Exploring Entrepreneurship’ in Moscow has come to an end. At the school, students from Russian, Dutch, British and other European universities tried to identify the main factors that will influence the future development of small and medium-sized businesses around the world.