LHCb, a collaboration of one of Large Hadron Collider experiments, including a team of HSE University researchers, has published a news piece about the discovery of new tetraquarks, which are exotic hadrons consisting of four quarks. This discovery was made possible thanks to massive data samples gathered by the LHCb experiment with the use of algorithms developed at HSE University.

The Large Hadron Collider (LHC) is a 27-km long machine at the European Organization for Nuclear Research (CERN), in which protons are accelerated to 0.999999991 of the speed of light and collide in four big experiments. Hadrons (from the Greek word ἁδρός, which means ‘thick, massive’) are a class of particles that include protons – hence the word ‘hardon’ in the LHC name.

Before the 1960s, hadrons were believed to be the elementary particles that comprise matter.  Only in 1964 did researchers propose a hypothesis that hadrons may consist of quarks and antiquarks. Combinations of quarks may be in quantum-mechanical state with minimal energy – their main state – but like electrons in atoms, quarks may also be observed in excited states with different angular momentum values and quark spin orientations. Following the tradition of elementary particle physics, all of these quantum states are called hadrons and, more generally, particles.

In the quark model, hadrons consist of two or more quarks bound by strong interaction. They also interact strongly with each other, like protons and neutrons interact in the atomic nucleus, for example. The particles consisting of quark-antiquark couple are called mesons; three quarks (or three antiquarks) – baryons; and four – tetraquarks, which are also called ‘exotic hadrons’. Rarer pentaquarks have also been discovered. 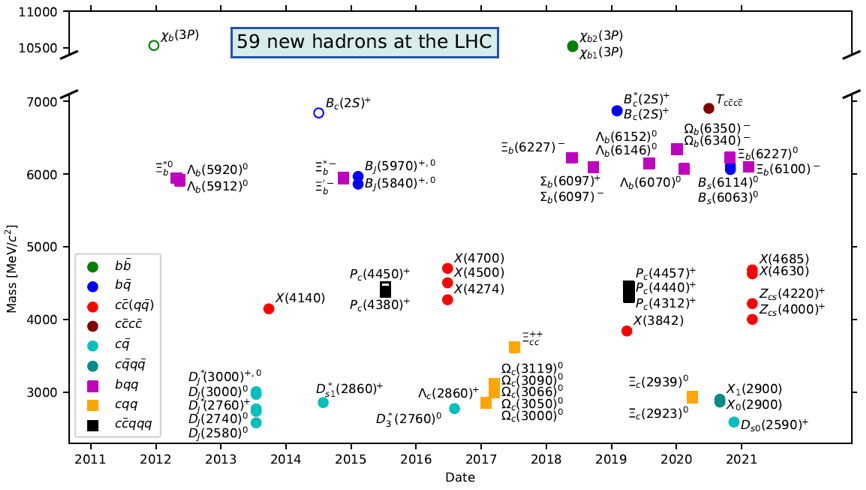 Huge numbers of hadrons appear in proton collisions in the LHC. But to effectively reconstruct and experimentally observe them, high-quality detectors are needed.

The figure from CERN news demonstrates new hadrons discovered on LHC since its launch in 2010. The colour of the symbol next to the hadron name indicates the contents of the particle quarks. Hadrons are grouped by their mass and year of discovery.

Over the 11 years since the LHC has been in operation, scholars on ATLAS, CMS and LHCb research collaborations have discovered 59 hadrons: on average, one every two months. ‘Clearly, the LHC is a Large Hadron Discovery Factory. Fifty-two of the 59 hadrons discovered in the LHC were discovered by LHCb collaboration researchers, which includes a team of scholars from HSE University,’ said Fedor Ratnikov, Leading Research Fellow at the HSE Faculty of Computer Science.

HSE University joined the LHCb experiment in 2018. The group based at the HSE Faculty of Computer Science, together with researchers from the Yandex School of Data Analysis, has done significant work to optimize the selection of interesting events in real time and to improve the quality of identifying various types of particles in the detector. Much of the data necessary for discoveries on LHCb is processed by algorithms developed at the Faculty.

‘This and some other improvements have become possible thanks to the highest expertise in machine learning methods that has been accumulated by the Faculty of Computer Science and used to ensure the best physical results on the experiment,’ said Fedor Ratnikov.

Today, LHC is undergoing considerable modernization. The start of the next session of the collider operation is scheduled in a year. Research teams are preparing experiments to collect new data as they implement new cutting-edge processing methods and new discoveries. 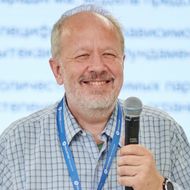