The IMF’s Senior Resident Representative dedicated his talk to the specifics of the pre-crisis development of the Russian economy and how they have influenced the current situation in the country. He started his speech by identifying the key problem of Russia’s economy. This turned out not to be raw materials, as suggested by the students in the class, but instability. And, according to Mr. Brekk, the Russian economy entered a period of instability long before the 2008 crisis.

This means that a reliance on raw materials, a primitive export structure and high inflation rates are merely contributing factors to the main problem, which is instability. Even during the rapid economic growth of the last decade (averaging 5% per year), the volatility of this growth was high. It is clear that it has reflected the behavior of oil prices and the global market environment. Unfortunately this has led to instability in the whole system, and this has influenced investments.
Over the last 10 years the average annual volume of investments in Russia has been about 20% of GDP, almost half that of  China and 1.5 times lower than India and other BRIC countries. In the context of fluctuating oil prices and double digit inflation numbers, investors do not want to risk significant sums of money, Odd Per Brekk emphasized. 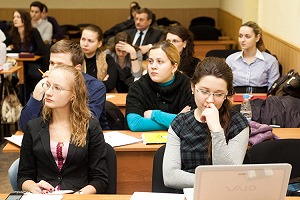 State economic policy has also contributed to instability during the recent ‘fat years’. In particular, if we look at the dynamics of state expenditure growth and the growth of the budget, we can conclude that the fiscal policy has been pro-cyclic. And economic theory teaches us that fiscal policy is one of the main tools smoothing the fluctuations, the IMF representative said.

From 2002 to 2007, when oil prices were very high and the Russian economy did not need stimulation, state expenditure also grew and additionally heated up the economy. During the crisis, when Russian GDP started to decrease, the government was afraid of a budget deficit and radically cut expenditure, depriving the economy of support. This is a typical example of an inefficient pro-cyclic policy, Brekk believes.

Another of Russia’s problems is its weak institutions and corruption, which, together with instability, seriously worsens its competitive situation on the global market. The key recommendations for the country in the near future are the transfer to a counter-cyclic fiscal and monetary policy, the fight against inflation along with strengthening the independence of the Central Bank as an institution and finally a concerted effort to reduce corruption. All these measures would help to create a more positive investment climate in the country.

In this regard, joining the WTO can be considered as a serious measure to improve the institutional environment. For Russia, more access to markets or a reduction in certain tariffs is not as important as the involvement of quality international institutions in the Russian market, the IMF representative believes.

Speaking at the HSE Banking Institute, Senior Resident Representative of the IMF in Russia, Bikas Joshi described the prospects for the Russian economy.

Anton Siluanov, Minister of Finance of the Russian Federation, spoke at opening of the XV April International Academic Conference on Economic and Social Development.

What will Capitalism in the 21st Century be Like?

On September 24th 2011, Craig Calhoun, new Director of the London School of Economics, gave an open lecture at the HSE International College of Economics and Finance on ‘Social and Political Challenges Facing Global Capitalism’.

OECD: Two Reports on the Problems of the Russian Economy

Martin Gilman, a former senior representative of the International Monetary Fund in Russia and the HSE professor appeals to learn one key lesson from current global crisis.

Y. Gavrilenkov speaks on the global economic crisis and Russian economic recovery for the Moscow Times. He believes that Russian response should differ from the policies adopted by other governments.