On the 15th May, 2015 Shimada Nobuo gave a lecture at HSE on Japanese Military Culture. The event was organised by the School of Asian Studies at the Faculty of World Economy and International Affairs. Shimada Nobuo brought some swords from his own workshop and allowed his audience to hold them while he talked about the enduring Japanese interest in weapons of war and the Japanese soul. Owner of the Yamashiroya gallery and specialist on ancient artefacts, Mr Nobuo advises the Japanese ministry of culture and works with the Hermitage and other museums in St Petersburg and around the world helping them with their Japanese collections. He gave his talk in Japanese with Russian translation. He gave this interview to the HSE News Service.

— How much are young Japanese people interested is their country’s history and the history of civilisation in general?

— Young people today don’t have much understanding of history. It’s not for want of studying, but that’s simply how the education system works. It’s a big social problem, but that’s the way things are going. Schools need to take a more serious approach to teaching history. As far as other countries are concerned, this generation growing up now is rather strange. A lot of young people don’t know anything at all about the Second World War.

— What about the Japanese government programme to study ancient Japanese artefacts in museums around the world. Can you tell us about it? What are its aims?

— If the initiative came from the Ministry of Culture, my life would be a lot easier. But they don’t do their own research. I came to Russia on my own initiative. I specialise in ancient Japanese culture. At the moment I combine my own interests and work with research outside my country. The Japanese Foreign Ministry was much more involved in this project than the Ministry of Culture. In October last year for example, with the Foreign Ministry’s help we organised a demonstration of Japanese sword making. The Russian embassy in Japan supported us with their enthusiasm and interest.

Every major museum has a huge collection of priceless Japanese swords tucked away somewhere. Some items are extremely culturally important. I have made lists of them and suggest to various museums ways to restore the best of them. Unfortunately, Japanese swords are generally viewed simply as weapons. I want to draw attention to the other side of these objects which is why I tell people about them and explain their value. It is one way to cultivate a positive attitude towards the Japanese around the world. 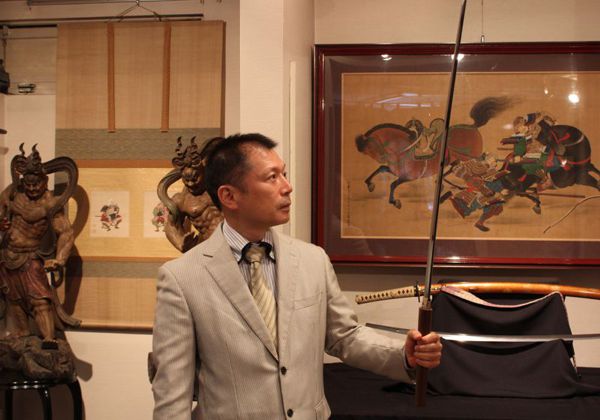 — Swords are a deeply masculine business, aren’t they? What about the girls?

— In ancient times women also wore swords behind their kimono sleeves, on the left-hand side. Not to defend themselves but to kill themselves if they were taken prisoner. They would commit suicide rather than suffer shame. Protecting the beauty of their bodies and souls the women become selfless. They do it for the sake of their families, their husbands who bear the family line. So yes, there were also swords for women.

— Your lecture at HSE with a sword demonstration is quite unlike any of the usual presentations at the university. How does your partnership with HSE work? What do you hope to achieve through your lecture and talking to our staff and students? Do you have further plans with HSE?

— It is a great honour to have the opportunity to give a lecture at your university. I would be happy to broaden our partnership in any way. Sometimes I visit secondary schools in Japan. I show the children the armour of Samurai warriors and talk to them about their history. In Japan, children move up from primary to secondary school at the age of 12. It is a transitional moment in their lives. They meet a lot of new people and make new friends. I ask them, ‘Does anyone in your family have a sword? Is there a sword in your heart? As if you can kill a person or bring them to life. So, when you talk to your friends you, having a sword either in your hands or in your soul, never use it to kill someone, only to show the firmness of your will.’ It’s surprising but even among Japanese children, for many of them it is the first time they have seen a sword. Their eyes burn with interest, they are fascinated. There is a Japanese school in Moscow and next year I am planning a similar event there.

— Are you planning an exhibition of your collection in Russia?

— I have a collection of weapons, some of them are valuable, for example, a battle axe which is historically valuable, I lend it to various museums to display. You could write a book about it. In theory you could have a whole exhibition with just the axe and lots of explanations.

— It’s quite surprising to hear that most people think of the sword simply as weapons, when really they are works of art...

— Well actually, I talk about that in my lecture. The separation of art objects from weapons can be better understood in a historical context. It would seem that in historical terms the two ran in parallel. I have brought a sword which was made by a master craftsman from meteorite iron - metal, which humans encountered for the first time. And in those times, a person with a weapon had supernatural powers, everyone bowed down to him. But weapons could not yet be called works of art then. So we can’t put them in opposing positions, they were part of the same thing. It’s possible that it all began when humans wanted to make something beautiful - a work of art.

— Although swords are hardly used for their original purpose today, many people would like to have such a valuable example in their collection. Why is there such a high demand for Japanese swords?

— Japan has the Samurai code of Bushido with its rules for conduct in war, morality and philosophy for warriors. I was once approached by someone who said, ‘We want to introduce some elements of Bushido into the way we run our company. Could you come and give a lecture about it?’ He believed that his business would be more successful if his colleagues were more like Samurais. Maybe there are people around the world who want to try it too, but I think it is a deeply Japanese thing. Perhaps from the outside, it seems that you only have to hold a Samurai sword in your hands to awake the Samurai in your heart.